The main reason for the valve core coming out on the Presta valve is over tightening the nut. So don't over tighten the nut! 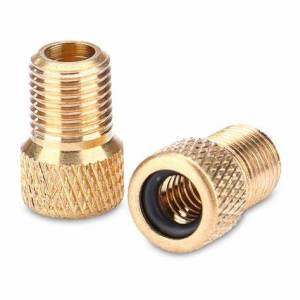 That is what my adapter looks like.
It has to be 15 years old.

I put a bit of silicon spray on the o-ring from time to time so it doesn't bind when it screws down.
R

I ride in areas where there's no cell reception and very little traffic, so I carry two spare tubes and tires, which kind of mandates some kind of cargo carrier. I've never really walked my bikes up hills since that would result in the bike being on the road while I'm walking on the shoulder tripping over the trash and beer bottles. Safer on the road, and riding up hill is where your glutes, hams, quads, and calves really get a workout. My first girlfriend asked me to the senior prom because she said that all the bike riding made my butt and legs look good. She was a senior and I was a freshman, so riding a bike got me laid and I haven't stopped riding since.
Another benefit of riding a bike.
R

Dropship said:
Furthest I ever cycled in one day was 140 miles (Sittingbourne to Leicester) on a camping trip, it was a beautiful summers day with a slight following breeze and I could have gone on forever.
The trick is to never never never cycle up hills but to get off and push your bike up them.
Also, try not to have a fixed destination or you'll spend the day fretting about whether you're going to get there before night and will tend to push yourself too much.
Personally I just kept on going til dusk, then pulled off the road and set up my tent in a wood wherever I happened to be..

Another trick is to eat at the very first sign of feeling hungry, you can either munch as you pedal along, or even better stop and eat while propped up against a farm gate.
I once learnt that the hard way in my early cycle-camping days after about 50 miles when I began feeling peckish but I thought "i'll do a few more miles before stopping to eat".
Big mistake! As I pedalled along I began feeling faint with a hissing in my ears, dim vision, spots before the eyes, cold sweat, and my stomach was screaming out for food, so I staggered onto the grass verge and ate like a horse, ravenously devouring food and drink from my rucksack and was right as rain after 15 minutes.
I later found out it was something to do with low blood sugar levels and cyclists even had a name for it- "Hunger Knock" or "The Bonk".. Another option is to utilize nutritional supplements while you're on a long ride. My favorite mix is whey protein, creatine, glutamine and a mix of other BCAAs mixed with water. The mix keeps your energy levels high while keeping you hydrated. I don't eat anything solid until I stop for the night.

Does this bike make my butt look big? No, but probably that 6 pork chops you ate did it.
G

Any chance finding a bike made somewhere other than China?

If not, are there any suggestions on what to get? I just want something simple -- doesn't need gears. But I do want Mountain Bike-type tires.

Just something that's better than walking.
B

everything seems to have gears these days and loads of them.
my childhood bicycle didnt have gears.

GaryLa said:
Any chance finding a bike made somewhere other than China?
Click to expand...

There aren't cheap, but there are bikes still made in the U.S. You are looking at prices of $1000 and up...way up.

bigpaul said:
everything seems to have gears these days and loads of them.
my childhood bicycle didnt have gears.
Click to expand...

My childhood bike didn't have gears either, and I never learned to ride a bike with gears.

DrHenley said:
There aren't cheap, but there are bikes still made in the U.S. You are looking at prices of $1000 and up...way up.

Check out Shinola bikes. Hand made in Detroit. Ghetto fresh.

thought they were marketing watches under that shoe polish name too. I‘ll give credit for trying to revive the infamous name.
R

A good way to get used to gears is to put your rear wheel up on a bike trainer and repeatedly go through the gears. I ride on grades every day so the small chainwheel on the front and big sprocket on the back definitely get used. I've always tried to keep the same cadence regardless to grade. Over time you'll be able to know your ratio without thinking about it. Also, you can buy extra chainwheels and clusters to suit your route so it's like putting in a custom transmission. Best of all maintaining and repairing a bike is very simple.
Next week the temps are supposed to drop by about ten degrees during the day, so I'll start riding much more. My favorite riding temps are between freezing and about fifty degrees. Used to like riding after dark because there's usually a lot less traffic. Nowadays there's so much trash on the road that night riding isn't very safe.

bigpaul said:
I dislike modern bicycles, we have a pair of hybrid bikes but they have stupid valves in the tyres that you cannot pump up with a foot pump and its to easy to pull the valve out then you cant get it back in and yes I've done it.
I would prefer an old fashioned bicycle with car type valves and no gears, if the hill was too steep to pedal up you got off and walked(keep it simple!). it was also easy to build a bike out of different parts.
Click to expand...

same here. I bought a used mountain bike and like everything except for the hydraulic brakes. What a joke.

EastenerWesterner said:
thought they were marketing watches under that shoe polish name too. I‘ll give credit for trying to revive the infamous name.
Click to expand...

Yes, they started with watches and added bikes a few years later.
R

bill harrell said:
Does this bike make my butt look big? No, but probably that 6 pork chops you ate did it.
Click to expand...

No kidding, if you find a woman with a fine butt and legs, she's probably been either riding a real bike or seriously into spin class.
Great exercise.

If you want a good american made bike check out Craig's list for 1960-1980's Schwins. Then you can upgrade the tires, wheels, brakes and gears. There are other older quality bikes that pop-up too. My brother-in-law has biked across the USA several times, he rides a Peuget he bought used in europe.

Most of the midprice bikes are made in Taiwan, they are the world leaders in innovation and quality, like Japan is the leader for motorcycles. Giant is my favorite brand. As for gears well they are esssential unless your riding the esplanade by the beach. Learning to use them is rudimentary, I had them on my bike 50 years ago. I think for preppers, mountain style bikes make sense but not necessarily with knobby offroad tyres. Big, 1.75~2.5 inch tyres gives you better stability on the rougher roads and allows you to go off road if need be, but of course a lot of dedicated distance riders ride racers with skinny tires. It's a great way to get fit that's for sure.
S

I must admit to being a little down on bicycles right now. This is because the Left wants to block off traffic lanes and create bike lanes. They do this even though on a two lane each way road through the business district they have to merge causing a traffic problem and NOBODY USES THE BIKE LANES. But when they do this in big cities like Portland and San Francisco I know why. White Leftists like the 3rd World look. They actually want their cities to look 3rd world because it is more inclusive. They also like it when people poop in public, in the streets and on private property and erect their squatting tents on the sidewalk. I cannot stress this enough---leftists like this look.

There is something else, relatively new, whereby urban people mount bike racks on the backs of their SUVs and BMWs and drive out to rural areas and ride bikes. You can always tell the city bikers because they dress up in costumes. They have little pointed hats, tight shirts and tight pants all in the same color. The really odd thing and the thing that galls me about these people is just because you dress up in a costume does not me the Vehicle Code does not apply to you---but they think it does. Bicycles and automobiles have vastly different rules of the road, at least in my state. Here they are restricted to the farthest possible position on the left hand side of the road.. This means they cannot ever make a left turn. They have to get off the bike and walk it across the street at an intersection. They cannot ride in the middle of any lane at all---costume or not.
You must log in or register to reply here.
Share:
Facebook Twitter Reddit Pinterest Tumblr WhatsApp Email Link