Never mind what poeple want, we the government do as we please. 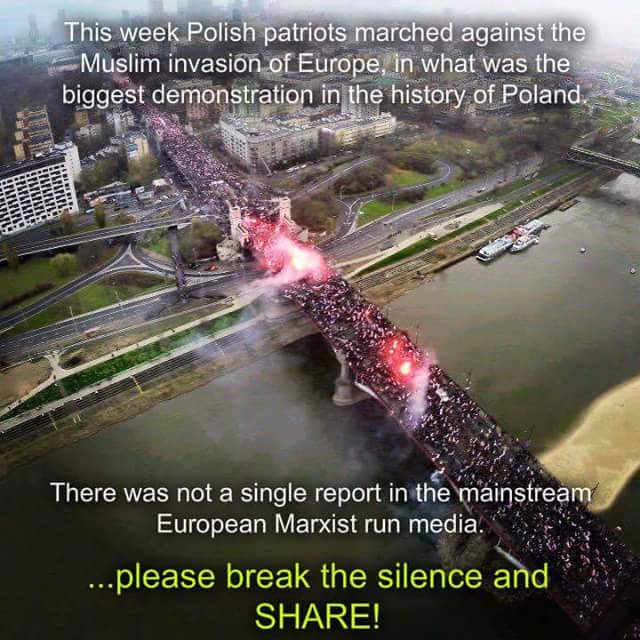 I love the attitudes of the Polish people!! They are a Christian Nation and they will fight tooth and nail to defend it. Warsaw is where Hunny's grandparents immigrated from in the early 1900's

Good to see a country with some brass willing to stand up for what they believe!
won't see that here

Clyde said:
Good to see a country with some brass willing to stand up for what they believe!
won't see that here
Click to expand...

Clyde not to simplify the problem, i think the US is to divided in its thought prosesses, the commies have managed to devide our society into a thousand splinter groups about everything, from guns to food to war, there is no more common goal, if you look at WWII there was one goal in mind. With the war in Vietnam the divisions started, with Iraq and Iran, Syria there is no commom goal or focus, even your leaders, be it from what ever side are devided amongst themselves about how to handle the situation and what actions should be taken, while they argue amongst themselves about things, s### is happening, but if your poeple in the US gets focussed on something and goal orientated, heaven have mercy on those thats in the way. Dont get me wrong i dont like Putin, but it looks like in Russia there is only one guy playing the banjo, and everyone else is listening and it does not matter what the outcome of his decisions might be, the Russian poeple has got his back. Here our "Boers" are no different, we are divided on so many things, our "Boer" nation has no more common goals, but i believe we are going to get one very soon, called SURVIVAL. (Just a bit of stats i managed to dig up during the week, we have over 70 000 white poeple murdered in this country since 1994, over 4000 white farmers murdered, this week only there was 4 farmers, and not one mention on any news media, not one. World murder rates are about 6 out of every 100 000 poeple, white South African farmers are 167 for every 100 000.)

Hello guys. Greetings from Poland and polish preppers.
Good to see that people around the world has seen our patriotic march that we have year after year. Sure that lots of people are taking part in this event but like Joe SA wrote, common goal is not easy even for us. Poles have same problems like other nations (in simplification) and scenario divide et impera work fine. Moste of people are divided by politics, left or semi-right wing (our actual governemnt) and don't see real threat. Diferent between us and western Europe is that we still have balls to say no, even if it is no political correct.
You must log in or register to reply here.
Share:
Facebook Twitter Reddit Pinterest Tumblr WhatsApp Email Link