Yep. She's toast. . . Bet she already knows it's coming too.

She'll croak before she can open her mouth, but, it would be good if she opened up, and all she knew went public.
B

I'm suprised her and Prince Andrew have not had fatal accidents yet.

Prince Andrew is untouchable. . . at least for now. He may come up having a horrific tragic accident like his momma one day though.

Danil54grl said:
Prince Andrew is untouchable. . . at least for now. He may come up having a horrific tragic accident like his momma one day though.
Click to expand...

oops sorry you are right. But I hold to the other part of my comment. Still think about the guy coming out his window.

BillMasen said:
I'm suprised her and Prince Andrew have not had fatal accidents yet.
Click to expand...

I would not be the least bit surprised. There are way to many people in very high places that do not want to hear that bird sing.

I for one would love to hear the truth about all that,. . . so many high players have been named. I honestly think they should all be jailed for the crimes they have done to those poor girls. Even if it was cohered and the under aged party was agreeable, they are much too young to make that kind of decision. They will later grow up regretting their actions.

Completely depends on how much dirt she has on who, what her 'suicide' release schedule is for it. She allegedly 'dated' Clinton for quite a while.

I'd personally like to see both sides lose. Let them kill her. Then let all their dark secrets get released to the public to see how evil they are. The winner will be the public (who care).
P

Unfortunately the mainstream media will just shout "conspiracy theory" so most will never know what is true or false.

Karloshi said:
Unfortunately the mainstream media will just shout "conspiracy theory" so most will never know what is true or false.
Click to expand...

Want to bet she has the proof? When operating in that kind of environment, I would certainly keep proof, so those in power will want / need to protect. Since she is now in custody, she know her life is not worth a plugged nickle, unless she provides real proof. Going to get interesting.
P

Allegedly Eptsein had proof and had made videos but that didn't do him much good.

It wont be suicide. They were too sloppy last time. However you can send your condolences to her family regarding her upcoming heart attack.

Epstein victims' lawyer warns Maxwell may kill herself or 'be silenced'

A LAWYER for the victims of Jeffrey Epstein believes Ghislaine Maxwell will also die in prison because she “knows too much.” Epstein’s alleged pimp was arrested by the FBI on Thursday on six …

I don't think we will ever know, it will end in the history books much like the Kennedy and Monroe affair, just a whole lot of theories.

She ain't dead yet! If she manages to remain in the land of the living, we may find out a lot.

I just learned that Maxwell's father was Robert Maxwell.
If you don't know who that is, the link to his Wikipedia page is below. The villainous media baron Elliot Carver in the Bond film Tomorrow Never Dies was based on him. He was suspected of being a triple agent with MI6, Mossad, and the KGB. His body was found floating in the Atlantic Ocean and he was "presumed" to have fallen overboard from his yacht. Official cause of death ruled heart attack combined with accidental drowning. The name of his yacht was Lady Ghislaine.

At his funeral, Israeli Prime Minister Yitzhak Shamir gave his eulogy and stated: “He has done more for Israel than can today be said.

Yeah Robert Maxwell was a crook.

This is how cozy Ghislaine Maxwell was with Prince Andrew. He let Maxwell and Kevin Spacey have a photo op sitting on the Queen's coronation thrones in Buckingham Palace (a HUGE NO-NO) 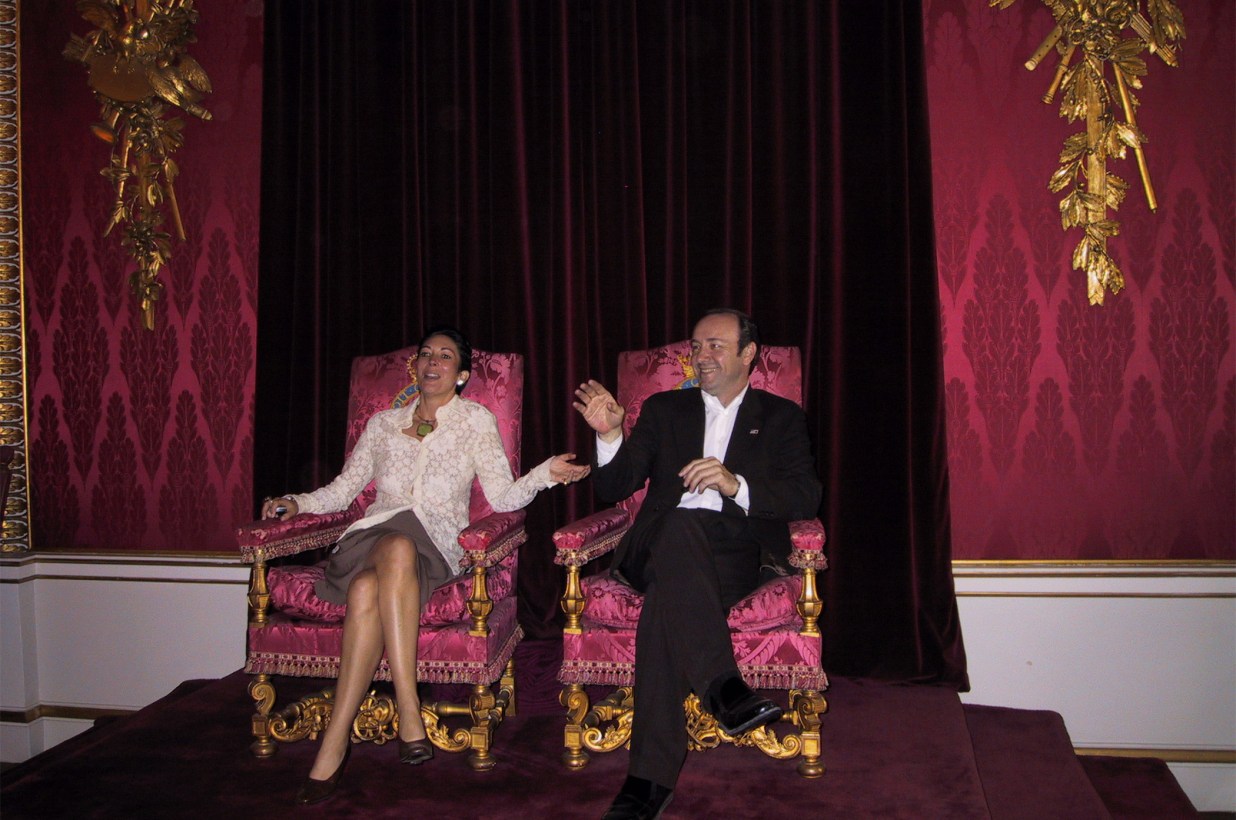