Voter fraud and the 2020 election

Don't know about overturning but it should be enough to disqualify Joe and ho for the next election.

It’s in the ballots. Now the printers of the ballots are in the hot seat. They better lawyer up. It appears that ballots in Republican areas were printed differently than in Democrat areas which caused more Republican ballots to go to adjudication and potentially be recorded as Biden votes... 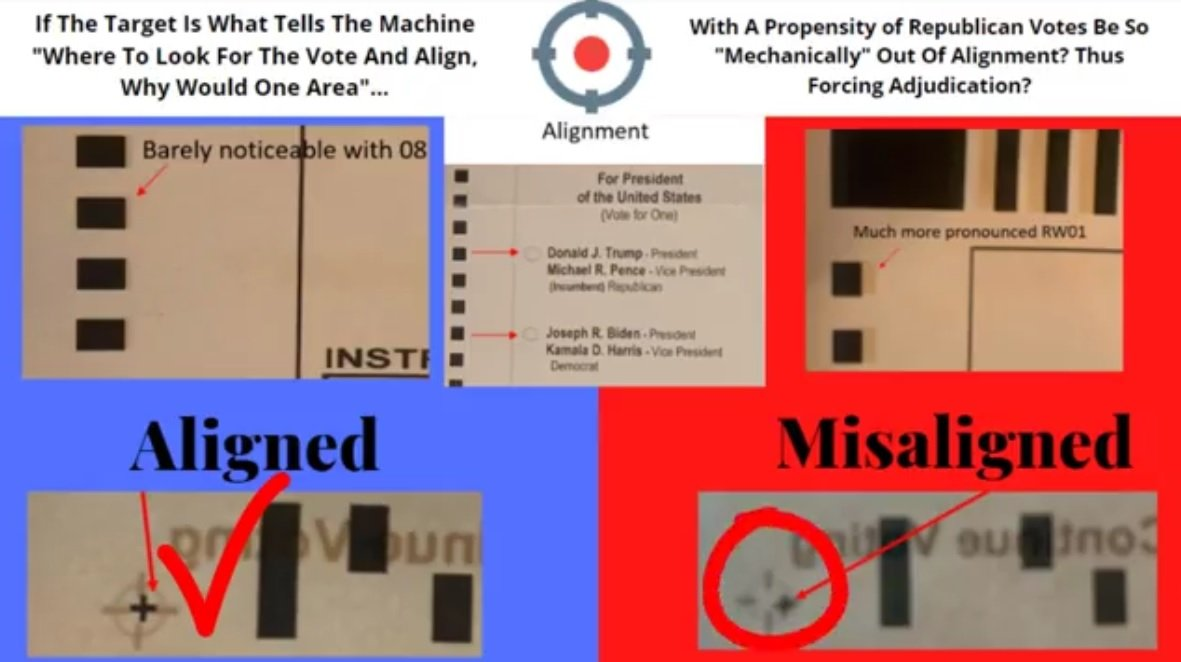 It’s in the ballots. Now the printers of the ballots are in the hot seat. They better lawyer up. It appears that ballots in Republican areas were printed differently than in Democrat areas which caused more Republican ballots to go to adjudication and potentially be recorded as Biden votes.

We reported in December that inventor and data expert, Jovan Hutton Pulitzer identified a pattern in Georgia where Republican district ballots were printed differently than Democrat district ballots. The Republican areas’ ballots were set up where a large percentage would go to adjudication. This allowed unknown individuals to record all the ballots for Biden.

Yesterday this same situation was discussed on Steve Bannon’s WarRoom Pandemic. In Antrim County, Michigan attorney Matt DePerno provided a double-bombshell update to his case relating to that county’s November 3, 2020 election and its voting machines and ballots from Dominion Voting Systems. On December 4, 2020, DePerno, on behalf of his client, William Bailey, successfully received a court’s permission to forensically audit the county’s Dominion machines used in the November 3, 2020, Antrim County elections.

DePerno had to fight off legal attempts to stop the public disclosure of this data, from both the radicalized Michigan Attorney General, Dana Nessel (D), and the Soros-backed dishonest and equally radical Michigan Secretary of State Jocelyn Benson (D).

Nessel filed a lawsuit, which Benson signed onto, to stop the release of this information!

On December 13, the night before DePerno’s emergency hearing to get permission to release his forensic auditors’ report, AG Nessel tweeted a warning shot directed specifically at “Lawyers who practice in Michigan,” letting them know that their oath prevents them from filing “unjust and/or frivolous actions” or from misleading the court.

DePerno was granted permission by the court at an emergency hearing on December 14 to release the findings of that report.

DePerno’s audit team, the Allied Security Operations Group (ASOG), uncovered and exposed, among other things, that the Dominion voting machines used in that 2020 election were set at a 68.05% error rate, when the allowable election error rate is .0008%! These “error’ed ballots” were forced out of the counting system and into the adjudication – manual review – by an individual who decides which candidates the ballots report as voting for. The Dominion system does NOT record who made the decision and when and does NOT mandate that at least two individuals sign off on the decision, one from each major party.

On May 18, as reported by UncoverDC, Bailey and DePerno’s case was dismissed by the court:

Judge Elsenheimer dismissed [DePerno’s] client’s case yesterday with a ruling based on what DePerno says is a ‘narrow decision’ that had nothing to do with any of the evidence he and his client, Bill Bailey, have presented.
Click to expand...

In another, May 18 exclusive interview with Jim Hoft, Patty McMurray, and conservative Michigan Republican activist Matt Seely, Matt DePerno expressed his resolve to appeal this decision.

Yesterday, Matt DePerno gave two shocking updates about this case, one relating to an anonymous user accessing the Election Management System remotely and changing data – proving there was internet access – and the other about newly uncovered data relating to the actual printed ballots used in the Antrim County 2020 election. He reported that the printing of the actual Dominion paper ballots appears to have been “intentionally modified” so that 20% of Republican votes were not counted!

Two things we put out late last evening, two new reports that came out. One shows that there was, we’ve proved now that there was direct access to the Antrim County Election Management System, because we show on November 5, we can see it in the forensic images, that an anonymous user logged onto the EMS remotely with escalated privileges and made changes to the database, when they were trying to re-tabulate the election.
Click to expand...

That is pretty damning for the non-forensic reviewers out there or people who do not want a forensic audit.

And the other thing, probably as equally as explosive. Everyone’s seen ballots before, like these ballots here [waves a paper ballot]. On the side of the ballot, there’s these black boxes, there’s 59 black boxes on the side of the ballot. We now see within the forensic images that in Antrim County those blocks, blocks 15, 18, 28, 41 and 44, were all intentionally modified, the height and the width, the shape of the blocks were intentionally modified in order to generate errors.

What does an error do? In this case by modifying those specific blocks, they were able to cause rejections for Republican ballots, meaning if you voted for Donald Trump and then put your ballot in the machine, your ballot was rejected at a rate of 20% more than Joe Biden ballots.

DePerno is actively encouraging Michigan citizens and voters to sign an affidavit (here) he will be placing up on his website today, already signed by 3,500 Michiganders, demanding that a full forensic audit be conducted throughout the entire state of Michigan.

To support Matthew DePerno and his continued efforts to fight for election integrity, go to: DePernoLaw.com and donate to his legal defense fund. See Deperno’s discussion with Steve Bannon yesterday:

(Trying to get Bannon's War Room Pandemic link here. My internet sucks during parts of the day)

Finally, the layout of the ballot is a big deal and the auditors in Arizona know it. They are not only recounting all ballots from Maricopa County’s results in the 2020 Presidential and Senate elections, they are also reviewing the ballots’ layout and measuring for discrepancies.

If these ballots are out of sync and we find they are out of sync in Republican precincts only, then we have another example where the printing of the ballots is in error and therefore in question.

What are the odds that this all happened randomly? We all know the answer to that.

I edited to insert article since I know some will not click on it. I feel like this is a MUST READ!! Still trying to link the Bannon interview. THE DEEP STATE IS fighting so hard against PATRIOTS who just wants answers. Why IF you REALLY THINK that the 2020 election was on the UP AND UP?
Last edited: Jun 11, 2021

It’s in the ballots. Now the printers of the ballots are in the hot seat. They better lawyer up. It appears that ballots in Republican areas were printed differently than in Democrat areas which caused more Republican ballots to go to adjudication and potentially be recorded as Biden votes...

Lucy has some explaining to do for Ricky!
D

Every state should be audited.

A recent election assessment conducted in Pennsylvania’s Fulton County and published in February 2021, found the existence of the Microsoft SQL database on the Dominion Voting Machines in the county. According to the Fulton County report, the analysts found “no valid reason” for the software to...

Dominos are falling. The chain reaction has begun.
D

Waiting for Joe and ho to reach critical mass! LOL

Someone get on the horn with trump and tell him to put on his good shoes to boot bidens ### out.
D

He needs steel toed boots so both of their butts ring like bells of freedom!!!