Acdoctor said:
Never make it down the long gravel drive, if they ignored the two keep out signs and made it pass the gate, they would see the sign that says shooting range ahead before being introduced to the spent brass injection machine. Lol
Click to expand...

I really HOPE they try to come to MY door!!! Biteme will have a few less minions!!!

Dave2001 said:
I really HOPE they try to come to MY door!!! Biteme will have a few less minions!!!
Click to expand...

Unfortunately it will be low level government workers not the creeper and the giggler themselves. They would not dare let us have that much fun .

Saw today where all you should have to do is put up a No Trespassing sign in a visible location if you don't want a knock on your door.

'NO TRESPASSING' - Lawmaker Says Vaccine Harassers Can Be Charged

This morning, Arizona State Senator Kelly Townsend informed us on how to protect ourselves against Vaccine Nazis. She shared this tweet telling us what we can do before the feds come asking for our papers. I have spoken to local law enforcement and if you don’t want the Federal government on... 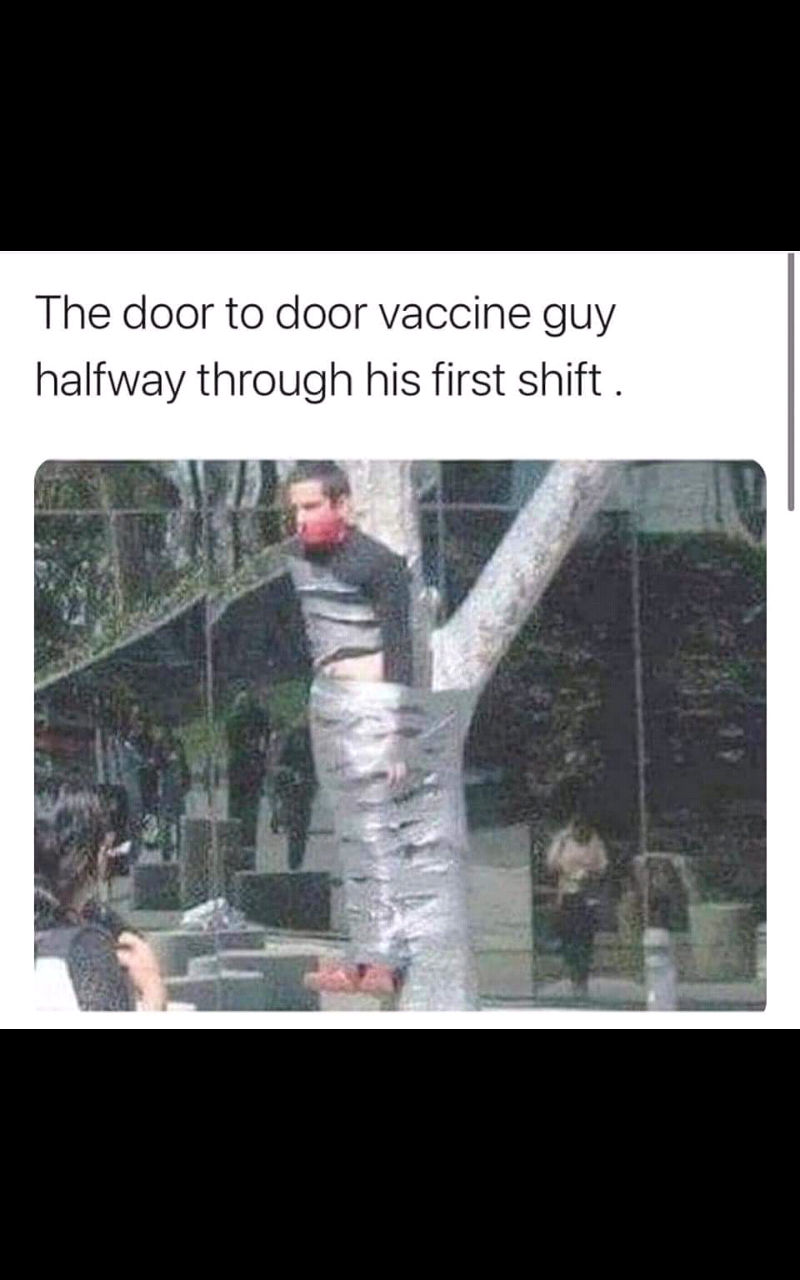 I have a "no cold calling" sign on my door but it seems most of them cant read either.

News from the French government and these legislative decrees will have very negative consequences.

- As of July 21, a government health pass with a QR code will be required for people 12 and older to gain access to bars, restaurants, cinemas, gyms, swimming pools, museums, shopping malls and other venues with more than 50 visitors.
Employees of these venues are required to have the QR code if they want to keep their jobs.

- Either you have to have two vaccinations to get the health passport or you have to pay for a PCR test yourself to be "free" for a few days. From September on, it is mandatory to have a third vaccination against Corona.

- A previous Corona infection is NOT considered as an entitlement to get a health passport, that is, a previous infection is not worth anything on paper, the vaccination is the only thing that is considered as a true value against the pandemic. The French government declares that the natural immunity against Corona is invalid and that it is mandatory to be vaccinated after contracting the disease. People who do not get vaccinated will be denied access to normal life.

- As of September 15, medical personnel who are not fully vaccinated will not be allowed to work and will not receive wages.

First this crisis was about relieving the hospitals, now it is about dividing the population and installing a total surveillance like in China, France is showing it and I am sure this country will now go up in flames within a short time.
I know how the French will react to this and I think there will now be riots and uprisings that will be much worse than those of two years ago, and they were already extremely brutal. If other countries follow the example of France, the ultimate civil war that will result will cost thousands more dead than Corona, Corona will be a joke against that, the Europeans should dress very warmly, this will take a bad end.
This system here is at the end, it is no longer to save and what the French government is doing now is actually suicide, the entire nursing staff in the hospitals that can not be vaccinated may either no longer work or quit your job, the hospitals can then no longer maintain the service and it will then probably die hundreds of people who also have other ailments. In addition, the state will probably exclude a large part of the population and discriminate, who must only pay taxes and nothing more may and no rights more has the angry, these people go on the street and it then bangs.

France is already a bomb in Europe, either the French government is in a few days history, or the police and army in France will shoot sharply at the population, both will announce the end of Europe.

I have already posted about the Covid Passports in France but cant remember where. It may have been in chat messages or Covid vaccine since I am worried that my job will require once FDA passes it. Thousands are not happy in the country. 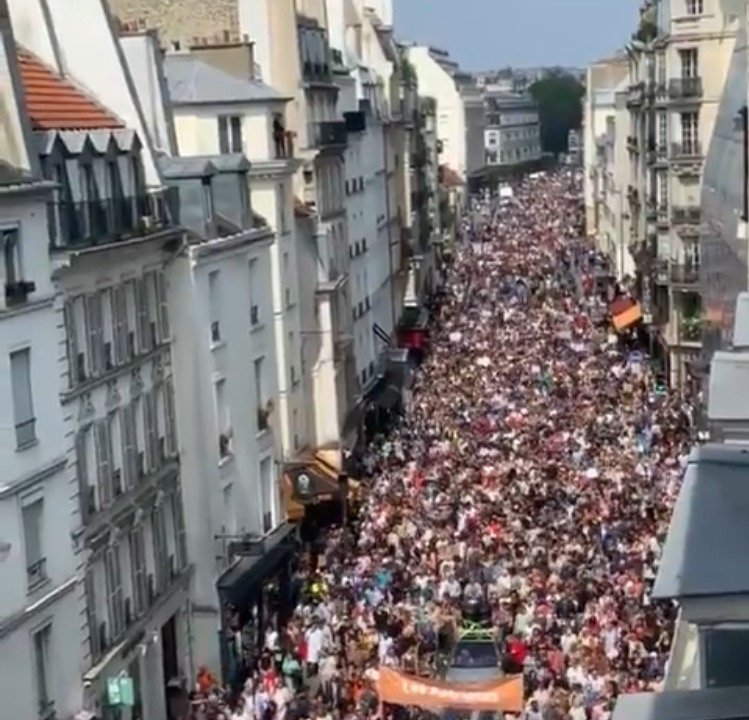 Thousands of protesters hit the streets in Paris on Saturday protesting against the new vaccine mandates imposed by French President Emmanuel Macron. Macron recently announced that a Covid passport would be required in order to enter restaurants and theaters. Macron also announced a new...

Danil54grl said:
I have already posted about the Covid Passports in France but cant remember where. It may have been in chat messages or Covid vaccine since I am worried that my job will require once FDA passes it. Thousands are not happy in the country.
View attachment 13062

Thousands of protesters hit the streets in Paris on Saturday protesting against the new vaccine mandates imposed by French President Emmanuel Macron. Macron recently announced that a Covid passport would be required in order to enter restaurants and theaters. Macron also announced a new...

Switzerland is an neighbour country of france. We share an border. But in our news there isn't any word about the protests of Macrons orders.
Same in Germany btw, we're recieving german TV here and newspaper too. Not an word about protests in France. But our news can't stop to proclaim millions of french are willing now to take the vaccine...

as from September anyone who wants to go into a nightclub in Britain will have to have a Covid Passport or they will be refused entry, most scientists think by September we will be into the 3rd wave of infections and we'll be straight back into another lock down.

If we would send all these so-called scientists and experts into the desert and not do any more tests, there would be no more corona.
I'm not the one who smiles at the Corona stuff in everything, but it is very exaggerated here in some ways and I'm sure all these measures and vaccinations are something else. The authorities guaranteed never to get rid of Corona, if Corona no longer existed, the authorities would have to take back the idiotic restrictions and give us our rights again, but they do NOT want that.

CDC Director Rochelle Walensky on Wednesday said European-style Covid passports may be the path forward. French President Emmanuel Macron recently announced that a Covid passport would be required in order to enter restaurants and theaters. Tourists visiting France will have to show proof of...

In Switzerland they are thinking about to take over this EU-Covid-Passport too. In first case it's to give more pressure to those people who won't take the vaccine.
The situation in Western Europe if you're non-vaccinated (dosn't a matter the reason) is at the moment like this:
- You're against the democratic system
- You're not social
- You're go to harm and kill all others
- You're going to die in autumn when the virus comes back
- You're an nazi anyway

For my understanding those are really serious medical facts to take an experimental vaccination... OK, i tend to be cynical....
Medical questions which are not in the interest of the whole politic pandemic course wouldn't be neither published or answered. This are more reasons to belive everything what our leaders are babbling. (Did i say i tend to be cynical?)

No joke yet, this are further discussions beside the covi passport:
- Vaccinated people shall wear an poison green bracelet where's an "Vaccinated" print to read.
- May also they shall wear an button in the same way.
(If they suggest the opposite was, means to mark all people who aren't vaccinated, it would remind to much at 1936 in Germany)

Interesting point: The tax and health care bills still are coming to the non-vaccinated too....

...and now the CDC is telling us that the VACCINATED are the super spreaders...

Our national health minister said a few days ago, all citizens of this country who do not vaccinate are egoists and behave unsolidarisch and endanger others and ourselves.
I have to say there really shit on it, what is the idiot afraid of, the vaccinated must have yes "theoretically" no more fear of infection, but keep to no more rules, the rest of the shot has not yet gotten the threatened that there is a kind of yellow or red star.
This says to me our Minister of Health who has not served a day in our army and so became a Federal Councillor, 20 years ago such a thing had not been imaginable in this country.
To such people I simply have to say, sorry, you can no longer take them seriously.

That sir sounds like common sense, which we seem to have a lack there of, namely at the upper echelons of the CDC, and government.

Was driving back from town yesterday, one of the houses on the road, had a PRIVATE PROPERTY sign out front. Was not there a few weeks ago. 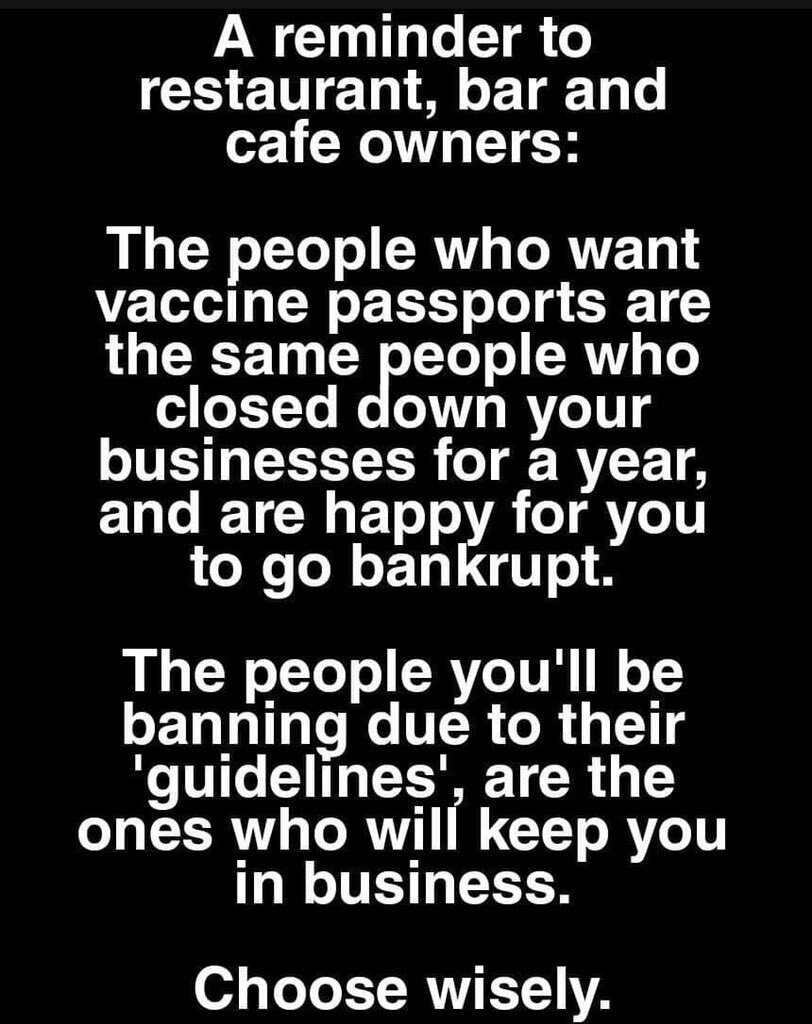 The politicians here are once again taking decisions, new this shitty certificate for recovered only 4 months are valid, but you must 1 month after the infection a vaccination can be made.
This means that if you had Corona, it will be counted less long than if you had two vaccinations, although a recovered person has more antibodies after 6 months than a vaccinated.

A PCR test is only valid for 24 hours and is almost worthless. The politicians say it openly that this is all done only that more people can be vaccinated, one builds up here at the moment extreme pressure.
Our government will decide in two days very sure that all people without vaccination are no longer allowed in restaurants, fitness centers, swimming pools and museums, one prohibits healthy people various basic rights without this will be of any use.
Our government has become a slave of the pharmaceutical industry and some idiotic Corona experts and puts everything drann to divide the people, it is deliberately fomented a civil conflict and it is lied with all means and untruths spread.

I think the government takes consciously in buy that some unvaccinated go crazy and go on others, then probably plan B comes into force that is extreme police repression and probably soon civil war.
Two years ago, federal councillors could go on the street without police protection, today you need special units to protect you from an enemy that you have created yourself, so fast is the disintegration of this society.
But one thing is for sure, EVERYTHING that the alleged conspiracy theorists said a year or two ago has now become REALITY. One or two years ago these people were laughed at by the authorities, today it has become exactly so.

It is happening! We have been seeing it happen in other countries and even here in the US. CA, NY and now Hawaii. . .

Hawaii to Roll Out Vaccine Passports at Restaurants, Bars, and Gyms

Danil54grl said:
It is happening! We have been seeing it happen in other countries and even here in the US. CA, NY and now Hawaii. . .

Hawaii to Roll Out Vaccine Passports at Restaurants, Bars, and Gyms