The Delicious Downfall of Fauci

I eat Delta Variants for breakfast. Anyone who had C19 has immunity to all the variants to a greater degree than any vaccination can provide. Don't listen to scare tactics. They are the death throes of a failed public health official.

FIREWORKS! Senator Rand Paul Rips Arrogant Fauci: "There Will be Responsibility For Those Who Funded the Lab, Including Yourself" (VIDEO)

Senator Dr. Rand Paul (R-KY) ripped arrogant Fauci during Tuesday’s hearing on the nation’s Covid response efforts. Fauci testified and responded to questions about the NIH’s role in funding gain-of-function research at the Wuhan lab. Rand Paul and Fauci got into a tense exchange over Fauci’s...

Rand Paul and Fauci got into a tense exchange over Fauci’s involvement in funding the Wuhan lab’s gain-of-function research that likely led to Covid-19.

Fauci AGAIN denied he funded gain-of-function research.
“There will be responsibility for those who funded the lab, including yourself.” Rand Paul said.
“I totally resent the lie that you are now propagating, Senator.” Fauci retorted.


https://twitter.com/i/web/status/1417502360163733511
Dr. Fauci refuted the claims under oath despite the fact that there are documents that prove the US was funding the Wuhan lab under his direction.
H

It is widely known that Dr. Tony Fauci funded the Wuhan Laboratory. The Gateway Pundit first reported on this in early 2020. “Dr. Anthony Fauci Seems to be Still Funding Gain of Function Research…The Chinese Military Is Involved In This Research” – Dr. Lawrence Sellin As reported on Tuesday...

I heard the exchange between dr Fauci and Rand Paul on Mark Levin yesterday. That arrogant lying POS Fauci needs to spend the rest of his life in prison, or worse.
S

The reason Fauci can just openly lie to Congress is because he knows neither the FBI nor anyone else will hold him accountable. Clapper, Comey, Brenner, Mueller, all got away with it. Why shouldn't Fauci?
H


Didn't he testify before congress, that he did NOT fund research?

DATA: Most Americans Say Fauci Has 'Lost ALL Credibility'.

Anthony Fauci’s approval numbers are in the tank, according to new data from Rasmussen Reports. A survey conducted in early October reveals that the highest paid bureaucrat in the United States – “Dr.” Anthony Fauci – no longer has public support. The director of the National Institutes of...

‘Fauci’ Documentary Is Getting Rough Reviews From Rotten Tomatoes Users

Theres so much smoke,, yet they hide the fire very well.There word salad and bullshit is not going to protect them. When are the arrests going to happen?
M

To be honest, I find it a bit unsettling that Fauci's name starts showing up about the same time the HIV epidemic was just getting kicked off in 1981. It appears he was looking for a vaccine for that one too. A stunning success that. With that lifelong failure under his belt, he would not have been my go to guy for covid.

en.wikipedia.org
Yes, I've read that HIV had jumped to humans long before 1981. It doesn't appear to have taken off real good until 1981.
Maybe we won't have any more worldwide plagues if we don't use Fauci to find a cure.

So Fauci has experimented on millions of people and that's okay, but when you mess with puppies the Left is ready to join in the Anti-Fauci crowd.

The Left has some odd priorities.-
M

robinjopo said:
So Fauci has experimented on millions of people and that's okay, but when you mess with puppies the Left is ready to join in the Anti-Fauci crowd.

The Left has some odd priorities.-
Click to expand...

Any ideas on how the left feelz about pre-born puppies?

This man is a sociopath, pure freaking evil and he is getting money from US, the taxpayers for his "job" and horrific experiments that he has to take to other countries because in the USA he is not allowed! It's not only puppies. . . This man is SICK!! First link is the puppies that many have seen now. But there are more coming out now . . .

The White Coat Waste Project, a taxpayer watchdog group, has provided The Gateway Pundit with new examples of Dr. Anthony Fauci facilitating cruel and unnecessary taxpayer funded experimentation on dogs — this time in Tunisia. Documents uncovered by the organization found that the National...

Researchers also reportedly “cut out” the puppy’s vocal cords, so they could work without hearing their constant cries of pain.

The despicable experiments on beagle puppies were first mentioned on The Gateway Pundit on August 8th and are just FINALLY hitting the national headlines.

In yet another segment of the Fauci horror show, new documents emerged that show how the NIAID spent almost half a million in taxpayer dollars to fund abusive experiments on dogs even though the research had already been conducted. The White Coat Waste Project used the Freedom of Information Act...

Fauci's House of Horrors: NIH Spent 16+ Million in Taxpayer Funds on Disturbing 'Toxic Brain Injection' Experiments on Monkeys; "Drilled Holes in Their Skulls and Implanted Devices into the Brain"

Another shocking report by the White Coat Waste Project has uncovered how the Fauci-led National Institutes of Health (NIH) has spent millions in taxpayer funds on despicable experiments where researchers would “cripple monkeys with toxic brain injections” through implanted devices in their...

www.thegatewaypundit.com
In total, Yerkes NPRC holds over 4,000 primates that are used in frivolous and cruel experiments which are opposed by most Americans.

The ‘toxic brain injection’ research is just one of several concerning experiments that the NIH has greenlighted with taxpayer funds. Some of the other concerning ways they have spent public dollars include:
The sci-fi-style brain implants in primates are just the latest segment of the Fauci horror show. Recently, it was uncovered that this sick monster also approved large sums of taxpayer money to fund abusive experiments on dogs – even though the research had already been conducted.

The pictures of the AIDS babies they experimented on are heartbreaking. How did he get away with these horrors for so long.

The horrors of Doctor Fauci continue. This man is a nightmare. We first reported on Dr. Fauci using taxpayer money to pay for tests using aborted baby parts in early May: Dr. Fauci is Funding Gruesome University of Pittsburgh Study Skinning Scalps off of Aborted Babies and Growing them on Lab...

Dr. Fauci is Funding Gruesome University of Pittsburgh Study Skinning Scalps off of Aborted Babies and Growing them on Lab Rats (VIDEO)

The University of Pittsburgh is growing scalps from aborted babies on lab rodents. This is straight from a horror movie. Photo via Life News The scientists are using human baby fetal skin processed via removal of excess fat. And Dr. Tony Fauci is funding this gruesome study. Via LifeNews: A new...

www.thegatewaypundit.com
The University of Pittsburgh is growing scalps from aborted babies on lab rodents. 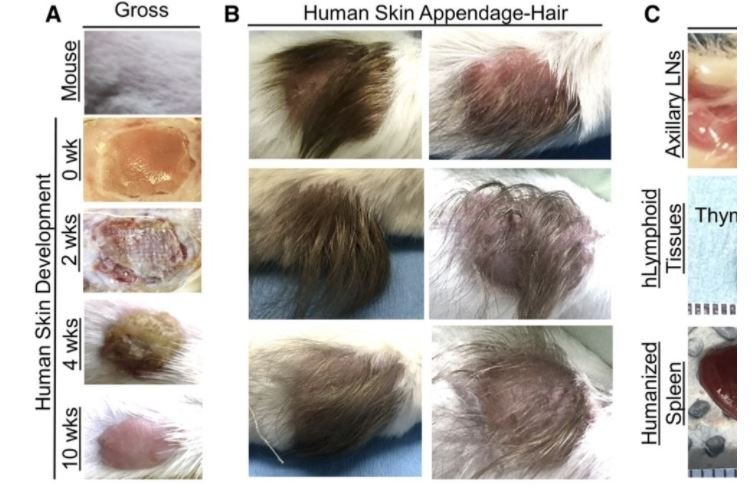 Photo via Life News As reported earlier — The University of Pittsburgh is growing scalps from aborted babies on lab rats. This is straight from a horror movie. The scientists are using human baby fetal skin processed via removal of excess fat and growing the baby hair on rats. And Dr. Tony Fauci...

“Publicly available information demonstrates that Pitt hosts some of the most barbaric experiments carried out on aborted human infants, including scalping 5-month-old aborted fetuses to stitch onto lab rats,” the Center for Medical Progress said in a statement.

The information comes from a study that University of Pittsburgh researchers published in September 2020 in the journal “Scientific Reports.” It describes how scientists used scalps from aborted babies to create “humanized” mice and rats to study the human immune system…

… a number of the experiments using aborted baby body parts at the university are funded by U.S. taxpayers through the National Institutes of Health and, in particular, Dr. Anthony Fauci’s National Institute of Allergy and Infectious Diseases office, CMP found in its investigation.

In 2005, the city of New York hired the VERA Institute to form a final report on the drug trials. VERA was given no access to medical records for any of the children used in trials. Their report was published in 2008.
They reported that twenty-five children died during the drug studies, that an additional fifty-five children died following the studies (in foster care), and, according to Tim Ross, Director of the Child Welfare program at VERA (as of 2009), 29% of the remaining 417 children who were used in drug studies had died (out of a total 532 children that are admitted to have been used). [LINK]
The WIKIPEDIA writers cover up all details, as is expected.
No payment or compensation has been paid to any of the children used in the trials, or to their families.
Click to expand...

A hospital nurse later spoke out to reporters about the testing. She reported that children would immediately get sick, break out or throw up during the testing.
They were orphans at the Incarnation Children’s Center in New York City.

The ICC Investigation website offers several documents and interviews with children and childcare workers at the hospital who participated in the research.

Note: The investigator credited with exposing this horrific study on AIDS orphans is (or was) an AIDS ‘skeptic’ but his research and interviews were explosive and disturbing.

robinjopo said:
The pictures of the AIDS babies they experimented on are heartbreaking. How did he get away with these horrors for so long.
Click to expand...

I just posted about this one. Learned only this morning about his experiment of the AIDS babies. I recently became aware of the others within the last few months. WE THE PEOPLE on a whole world wide are their NOW EXPERIMENT. I believe we have a lot of sociopaths around the world who do these "experiments" and live out their gruesome"fantasy world" using our tax payers money.
H