Politics: the next 2 years

Another example of AOC economic brilliance: "Corporations like Walmart can...and and...Amazon can get paid by the government, essentially experience a wealth transfer from the public for paying people less than the minimum wage."
T

Arcticdude said:
That really isn't fair Robin. What's AOC's IQ? Maybe 12? Which is about the same for any liberal.
Click to expand...

DrHenley said:
Yes, she really is that dumb! She thinks that the 3 billion dollars is sitting idly in a bank account somewhere and they can just spend it on whatever they want to.
Click to expand...

I've heard that the human brain is truly amazing. It is working 24/7/365 from long before you are born until the moment you vote democrat.

Let me see how this works. Amazon would have built a big building that would have paid $3billion in property taxes. But they didn't build it, so no building to tax. What was her IQ again?

I still say she'll last a while. After all, every idiot out there is feeling really smart when they look at her statements. If she disappears, they'll become the dumbest person they know of.

DrHenley said:
Another example of AOC economic brilliance: "Corporations like Walmart can...and and...Amazon can get paid by the government, essentially experience a wealth transfer from the public for paying people less than the minimum wage."
Click to expand...

It may be because I'm a country girl, but I cannot comprehend this sentence. It doesn't make any sense to me.

But to her constituents, it probably makes perfect sense. 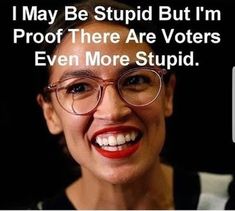 The woman got 100k votes and acts like she did something marvelous.
T

robinjopo said:
It may be because I'm a country girl, but I cannot comprehend this sentence. It doesn't make any sense to me.
Click to expand...

Robin, you raise a great point, let me clarify.

AOC thinks that gov't takes our tax money and just gives it to Walmart & Amazon. She really doesn't think she needs to raise taxes. She just needs to take that money that Walmart/Amazon get and instead spend it on programs 'for the people' like "low-cost healthcare". And that would cover all the costs.

Never mind that I heard an estimate of $93 trillion to do her 10-year green deal. And I think that estimate is very low.

I think it's just the opposite. Corporations never pay any taxes. An example. Let' say they put a $5,000 tax on every new car sold. Ford & GM won't pay a penny of that. When you go buy a new F150, you (the consumer) pay the $5k tax. Let's say Ford pays $100k in property taxes on the factory that makes those F150's, and that plant puts out 10k trucks/year from that plant. Guess what, the sale price on every one of those F150's costs an extra $10 to cover that property tax. You cannot claim to tax their profits, the companies simply raise prices. Now if gov't taxes excessively a business to where they cannot compete with foreign producers, then that business will simply close their doors and jobs will be lost.

Now compare that to an individual. If you want a new F150, you will pay that extra $5,010 for it. Now you can say no to the F150 and get a Toyota Tundra truck instead. And when enough people make that choice, Ford will close that factory & 20k people will lose their jobs. Do that over and over and all jobs get exported. You can say to a degree that's part of the Socialist path (an unavoidable part but not their plan). Or gov't can tax all trucks, and you will pay that $5,010 if you want a truck. Now if your job/business is built on having a truck, you can choose to quit. And again that's part of the socialist path of people not working. But bottom line is that individuals cannot pass along their excessive taxes, it comes directly out of their savings/other expenses.

Business will pass along the taxes or shut down. Imports will be then be taxed (tariff) so they will raise their prices (passing along the tariff fees), until people quit (can't afford) buying the products and sales slump so much it is not cost effective to sell the items in the USA. So what do you have left -- Venezuela --- USA---. No jobs, no factories and no imports, because the country can't collect enough in taxes / tariffs to pay it current and past bills. WELCOME to the NEW liberal Democratic USA. This is not if but how long until situation. The "Free Lunch" crowd is growing every year. Heck, Hillary won the popular vote, how long before the next liberal win's both the popular and electoral vote? Stock up now on those items that you will need and lose after the Liberal SHTF.

Here's my take on AOC: the young lady does not have a clue that middle America and most of America depends on fossil fuels.

She lives in the city and hasn't a clue as to what it like to live where there isn't a subway to get you where you want to go. She has probably never felt the earth beneath her feet except in Central Park, she can't imagine the world where we actually work the fields and plant and harvest so she can eat her organic dinners. She doesn't know how those crops rely on fossil fuels to be planted, harvested and transported from the heartland to her markets. She is one of those that doesn't want to slaughter animals "Just go to the store and buy them" type people.

These young kids are already getting so brain washed by her, it is terrifying.

They have no idea how food and clothing are made. It just magically shows up.

I also believe this abortion after birth legislation is backfiring.

A friend just told me that one of her sources said the NK Talks ended early because of security concerns for Trump and Kim.

I would recommend Everyone that didn't get to see President Trump's speech today at National Harbor MD look it up and watch the whole thing . Im off work today is or I would have missed it .

Psalm7 said:
I would recommend Everyone that didn't get to see President Trump's speech today at National Harbor MD look it up and watch the whole thing . Im off work today is or I would have missed it .
Click to expand...

Is that the CPac?

robinjopo said:
Is that the CPac?
Click to expand...

Oh yes. If the RNC would listen to him, we would still have the House

I did a screen shot to save youbtime, but this is truly sad. This is what they see as stressful. God help us all.

robinjopo said:
I did a screen shot to save youbtime, but this is truly sad. This is what they see as stressful. God help us all.
Click to expand...

If Trump doesn't hold these Deep state enemies accountable and bring them to justice, then we the people will have to do so. I'm talking about, doing whatever is neccessary, by use of force if needed.

They have made Gitmo larger. Its in Stars and Stripes and Military News