I'm posting this as an FYI because of one part of the news story that is of direct interest to us. I've posted the text in BOLD RED below. 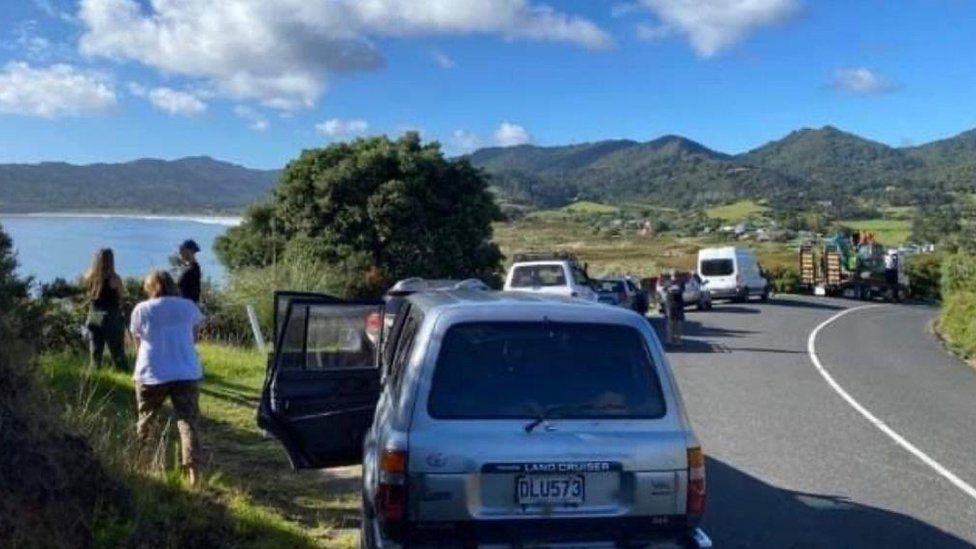 image copyrightGetty Images
image captionPeople wait on higher ground on Great Barrier Island amid the tsunami alert
Three earthquakes, including one of the strongest ever to hit the region, struck off the coast of New Zealand on Friday, triggering tsunami warnings that have now been stood down.
Thousands were evacuated from some coastal areas of the North Island after the third, 8.1-magnitude quake struck.
There were reports of traffic gridlock as people tried to reach higher ground.
The national tsunami warning was lifted at 15:43 (02:43 GMT), some 13 hours after the first quake.
Some wave surges hit parts of the coast but, by Friday afternoon, authorities said the largest waves had passed. Residents were told they could return home but were warned to stay off beaches.

media captionNew Zealand: "What happens if there is another earthquake?"
The South Pacific archipelagos of New Caledonia and Vanuatu have been warned to prepare for dangerous waves.
Their coasts could see wave surges as high as 3m (10ft), while parts of South America - including Peru, Ecuador and Chile - were warned they could see 1m waves reaching their coasts.
The Hawaii-based Pacific Tsunami Warning Center said "tsunami waves have been observed", but as yet no damage had been reported.
'Bumper to bumper' traffic
New Zealand Prime Minister Jacinda Ardern posted on Instagram: "Hope everyone is ok out there."
The three earthquakes, all above 7.0 magnitude, came during the early hours of Friday.
The last, at 8.1, struck at around 08:30 near the uninhabited Kermadec Islands, 1,000 km (621 miles) north-east of New Zealand.
While earlier tsunami warnings had been called off, the third quake prompted the National Emergency Management Agency to send out a new alert and tsunami sirens sounded in some areas.

The agency told people near the coast in several areas to move immediately to high ground or get inland as far as possible.
It said "strong and unusual currents and unpredictable surges" with tsunami activity continuing for several hours.
Local media reported gridlock in towns such as Whangarei and Whakatane as people tried to flee their homes, schools and workplaces.
In nearby Ohope town, resident Leslie Peake was quoted by the New Zealand Herald as saying the traffic was "bumper to bumper" with "huge queues of people evacuating".
New Zealand's civil defence department advised people to walk or cycle to avoid getting caught in traffic
Meanwhile local media posted footage of waves rolling into Tokomaru Bay.
S

That leftist prime minister will blame the earthquakes on guns and ban more of them.

It’s a right wing conspiracy....
A

It'll be blamed on man made global warming. The pandemic was.

That damn Corona Virus made the Earth shake, rattle and roll
A

And Trump. Everything is blamed on him, so I'm sure he had something to do with it
B

Amish Heart said:
And Trump. Everything is blamed on him, so I'm sure he had something to do with it
Click to expand...

See, I knew it, I just read it on the internet, irrefutable proof!

After the Christchurch earthquake I’d have a planned evacuation route that would keep going to those higher peaks in the background of the pictures above..., having a motorcycle or Jeep that can go off road to skirt traffic jambs is a good idea too.
B

Brent S said:
After the Christchurch earthquake I’d have a planned evacuation route that would keep going to those higher peaks in the background of the pictures above..., having a motorcycle or Jeep that can go off road to skirt traffic jambs is a good idea too.
Click to expand...