New article about women and Guns

http://www.theblaze.com/contributio...r-men-to-tell-women-how-to-defend-themselves/
I just read this and I know it's a little old but it really pisses me off. I am no means a hard feminist but darn it.. this is ridiculous..I think men like Joe Salazar like having grey areas when it comes to assaulting women in any way shape or form. Maybe, just maybe if men (bad men) thought for one second a woman had a gun then a lot of this crap wouldn't happen... Nothing they say makes sense that is why I always conclude to the fact they want to disarm us, not protect us. How many women do we know have been harassed, assaulted, raped, or had someone attempt it..It just makes me sick and I'm thankful for the very few true good men that still do exist, you are a dying breed. I think it's up to me to define whether I'm in danger not some idiot who obviously lacks good judgement....this my first little rant!!! 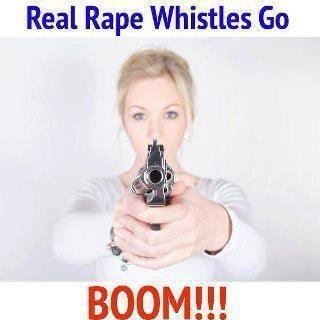 nice! I grew up in a shady neighborhood, bussed into the city to equal out the racial tension in elementary school, and picked on a lot...Never, ever in my life would I ever blow a whistle for help....if you are in the city, no one will come and if you are in the country, no one can hear you lol I teach my daughter's to kick them in the nuts(hopefully I can say that) run like crazy, and yell FIRE!


Make sure it's aimed at his family jewels. Hummm... better yet right between his eyes.

RV-Kitty said:
better yet right between his eyes.
Click to expand...

Because a dead man tells no tales.

Actually, double shot to the torso and then one to the head when they are on the ground.

Whistles don't work nor does calling for help as this woman found out.
http://en.wikipedia.org/wiki/Murder_of_Kitty_Genovese

Very true. So many people listened as this woman was murdered and did nothing.

old_anorak said:
Very true. So many people listened as this woman was murdered and did nothing.
Click to expand...


When this story came out I lived in Queens. I don't ever remember reading this woman's sexual orientation ever being and issue. It was a disgrace that people heard her and never called the Police.

Loomis said:
Whistles don't work nor does calling for help as this woman found out.
http://en.wikipedia.org/wiki/Murder_of_Kitty_Genovese
Click to expand...


I'm from NYC, the same borough as Kitty. I remember when it happened. People did call the Police. By the time they arrived it was too late. I don't know why these sites keep claiming no one called. There has to be something behind the facts of the case being hidden, kept quiet. Police screw-up?

I currently live in Queens, and a few blocks from my house a woman was slowly stabbed to death screaming for help over a half hour period but the cops were not called. I mean slowly...

Next in Flushing Queens, which is like 90% Asians, a young Chinese immigrant who was going to college to become a lawyer was beat and raped by a Hispanic man with a pipe. It was just off the side of a main street and there was a security camera that caught most of it. What was most disturbing was the camera caught several people walking by, peaking into the alley way, and quickly walking away!!! The 911 call was made after the act was done and he walked away with the pipe covered in blood.

Now maybe some of them are illegals or "undocumented" workers but they high tailed it out of there and didn't make a 911. When the news crew went to ask the local community why they didn't call, some people meekly said they were probably afraid of getting involved due to their immigration status.

Here is the video of the news and response by local officials about the victim Yu Yao. Many of the News Paper articles about the attack has been sanitized since now, but the real crime if you ask me is the two dozen people who didn't help, that is the real crime. That is why I prep, because no one else will give a damn, except maybe you guys he he.

This is nothing new. When I worked in Brooklyn I went to lunch with a few girlfriends every day. On the way back to the office, right on busy Fulton St, in broad daylight, we saw a crowd looking in the glass of a doorway that led to the apts above the stores. We kept walking having no clue what was going on..... it turns out a rapist had dragged a woman into the foyer and those people were getting a free show. No one tried to help her, no one tried to stop him but someone did call the police. By then he was gone. Unbelievable. That was around 1961.

I had heard this happened a few months before also. I switched jobs to get out of that neighborhood.
K

If I was going to venture an opinion about women and guns...it would have to come from my paramedic experience.

There is a device called Magna lock which can be retrofitted to a S&W revolver, and the owner wears a subdued magnetic ring on each middle finger.

Without the rings, the gun won't fire.

If the woman is a single mom, it allows her to protect her kids from both assailants and accidental discharges should the kid get ahold of the gun (which should never happen if the rules are followed, but who knows what resources will be available post SHTF).

Also, the gun is useless if the assailant somehow gets it away from the woman.

Massad Ayoob has written several articles and books on women and guns, and they are worth consideration by anyone who wants to be armed. His approach is non sexist and inclusive.

I hope this helps.

By the way, why are gun manufactures always making pink guns for women? Do they think that all women are in love with pepto bismol?
Last edited: Feb 6, 2017

My daughter likes to shoot and hates pink.
K

There's a lot of research going on for person specific safety's. I personally don't want a fingerprint scanner, or any electronic gadget as its just a potential fail when you need it. Something simple like a magnet may be a workable solution, but I'm still inclined to be without any. My safety is not being chambered and the safety engaged. Yes, if someone gets it away from me, then they could use it on me. Yes, it takes an additional second to flip the safety and chamber it. I'm accepting those risks. Gun safety is serious to me. It is kind of scary to think of how many individuals watch the news and get nervous, and then go out and buy a gun. No training, research or anything. Now you have individuals carrying loaded weapons around with no reguard for safety. Not too long ago a woman shopping had a toddler in the grocery cart and put her purse next to him. He found the loaded gun, while fidgeting with it fired it through the handbag, killing his 20 something years old mother. I would guess that better than 50% of gun owners bought impulsively and never took any safety course or training of any kind.

There is a device called Magna lock which can be retrofitted to a S&W revolver, and the owner wears a subdued magnetic ring on each middle finger.

Without the rings, the gun won't fire.
Click to expand...

Hell, this is pretty cool for ANYONE, let alone just women. The idea that a threat could take my gun, and then be unable to use it...priceless. I have to check into that. (It would also be easier for me to leave it in the car, without worry).

The cost of the conversion is $360.00 and $60.00 for each standard ring. Shipping is priced according to the shipping policy outlined above. Each order takes three to four weeks to process.
Click to expand...

But man, if I had small children in the house, this would be a no brainer. It does suck though, that a ring will work for any such protected gun. It isn't gun specific. But assuming that would be a rarity.

A guy I read on a gun forum in the US who lived in a high crime area said he has his hand gun simply attached to a wall mounted magnet near his bedroom door way above head height where his kids cannot reach.

Silent Earth said:
A guy I read on a gun forum in the US who lived in a high crime area said he has his hand gun simply attached to a wall mounted magnet near his bedroom door way above head height where his kids cannot reach.
Click to expand...

Ever hear of chairs to stand on?

Brent S said:
Ever hear of chairs to stand on?
Click to expand...