I will kick it off 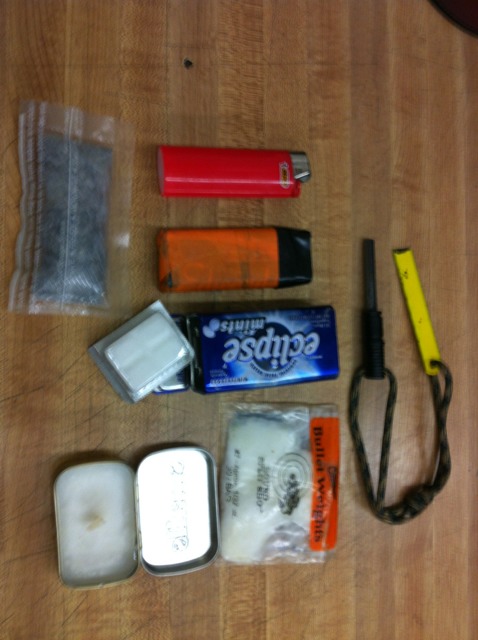 Oh I like it! I need to build mine... All of my stuff is just thrown in the bag right now.

Always have my zippo on me plus a bic. When I wear vest on the bike I also have a butane torch. Have a couple bics and some match's in the truck. Have fire steel, matches, bics and lint right now in my bob. Also have a can of lighter fluid in the truck as well on my saddle bags on the bike.
M

Thats it.. I think tts all we need.

Zippo, some Bics, and a small pack of windproof/waterproof matches.
I actually want to pick up one of those quick strikers too, but really, mine is more for a GHB vs. a BOB.

My can kit, everything fits in the can except for the strike force, my fire/steel is on my bush knife 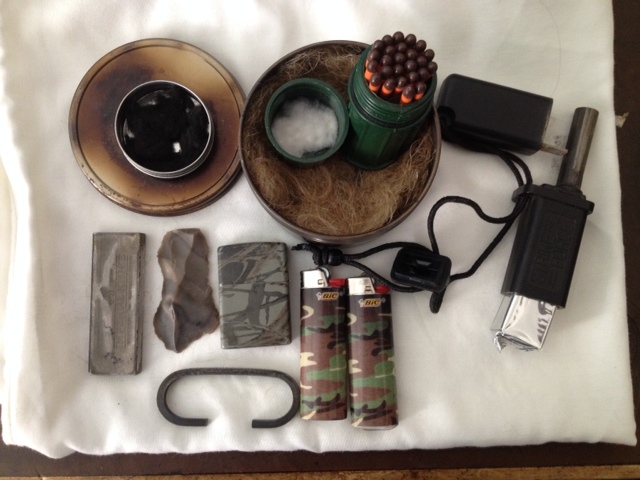 Love the idea of a cotton ball with the matches

Love the idea of a cotton ball with the matches
Click to expand...

The UCO Stormproof comes with the cotton in the cap

I can't resist any longer. This is what I found while unpacking over the last month. I'm sure there are matches around here somewhere because I used to collect them from restaurants and bars. I just haven't gotten to that box yet... 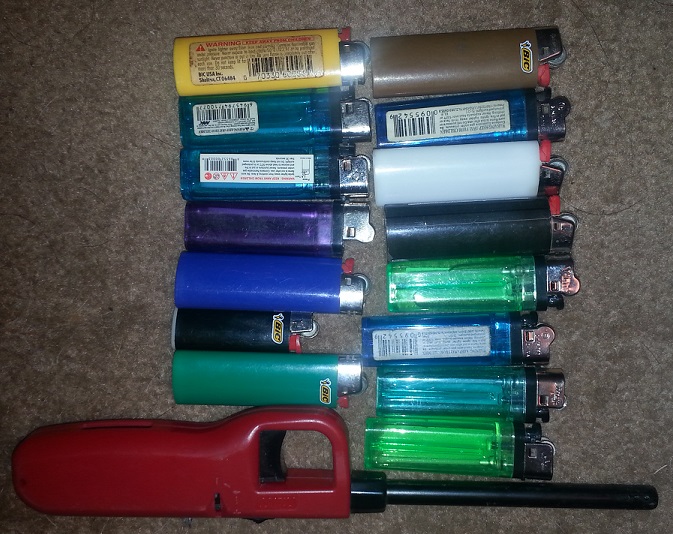 I have all those, except the cotton balls, but I have a bag of about ten bick lighters. Oh, I also have a good sized magnifying lens. I think I could start a fire in the dry with two sticks, but why would you want to when there's lighters?

I have gone across the board with this, really. I've gone so far as to take a green propane torch in the woods when I knew conditions would be bad enough. No kidding. I got a lot of looks about that, but when my fire was up and running I was glad I'd done it. Of course, waterproof, "Strike-anywhere" matches in a waterproof container is a must have, lighters of different sorts, flint & steel, magnesium, fire pistons... The list of tools goes on and on. Fire making is a basic idea, but some of the tools allow for different techniques, or even a lack of technique. I believe you're better off learning to make fire with little to nothing. If you have tools & kit to help out, then that's just icing on the cake. Savageagle has started a good thread on "How to". I'm hoping to get a little more info on what you prefer to use when you don't have a stove to work with. Let me tell you about a couple things I've used...

"Flamepons"- These are actually cotton rolls from a dental office, but anything including cotton balls work. The cotton rolls look like tampons without the strings. On that note, and actual tampon would work just fine for this too, I suppose. I took an old jar of hair grease and covered the cotton. It's a pretty messy, and it smells like coconuts, but it burns like the dickens! I'd prefer something without smell, like vaseline or aquaphor, but I used this because it was on hand. I would cover the cotton with grease and they burn for 10-20 minutes depending on how well they're made and what the conditions are. I have also pre-made these by melting wax from candles or wax bite wafers(Again from a dental office). They literally burn like candles. We add them into the tinder & kindling to really get things rolling. Even once we've added wood that's wrist sized, they will usually get them burning with little to no tinder.

"Snack Candles"- Fritos, cheetos, and other greasy snacks like this work well, too. That's assuming you can get them lit to begin with, though. Like flamepons, they won't light themselves. You have to have a heat source to get them going.

There is a surplus fire kit here, matches, and other things that sum up what's available in my kit, but clearly this doesn't go every time I'm out & about. The BOB has different kit than the GHB does, and something as bulky as the torch only goes when I know carrying it won't be an issue.

Snack candles is a great technique; you can turn one stale Frito into a useful cooking fire. Great if you have a lighter but low on fluid; just get the Frito lit and put the lighter away. The oils on the chip will burn long/hot enough to get your tinder going.

TheShadowKnows said:
Snack candles is a great technique; you can turn one stale Frito into a useful cooking fire. Great if you have a lighter but low on fluid; just get the Frito lit and put the lighter away. The oils on the chip will burn long/hot enough to get your tinder going.
Click to expand...

Dang. . . what does that say about the food people ingest now days that a Frito can be used to start a fire!

Danil54grl said:
Dang. . . what does that say about the food people ingest now days that a Frito can be used to start a fire!
Click to expand...

You said it! I personally don't really like Fritos but I doubt my Nacho Cheese Doritos are much better. My wife does her best to cook with "real food;" there's this blog called 100 Days of Real Food that she gets tons of recipes and ideas from. It's very hard to eliminate premade processed snacks, especially at work, but we do our best with meals.
You must log in or register to reply here.
Share:
Facebook Twitter Reddit Pinterest Tumblr WhatsApp Email Link