OK, this is a controversial topic I know. So let's just get it out of the way...

After much deliberation, I have decided that I want to have some "gimmie bags" to give to people who I decide do not pose a threat, and who need something to eat.
The question is what to put it it?

Here is what I came up with:
Two bottles of water
One plastic cup
One plastic spoon
Two Hawaiian Punch "Singles To Go" packets (made for adding to a water bottle)
One Swiss Miss instant cocoa packet
One Nestles Momento instant coffee packet
One Cliff Bar energy bar
One packet of Planters Trail Mix
One packet of cheese crackers
Four Slim Jims
One packet of vanilla creme cookies
Two packets of Wet Ones
I figure that should be enough protein, carbs and water to sustain one person for a day, provided they are not very active. I'm also considering putting a vitamin tablet in each gimmie bag. 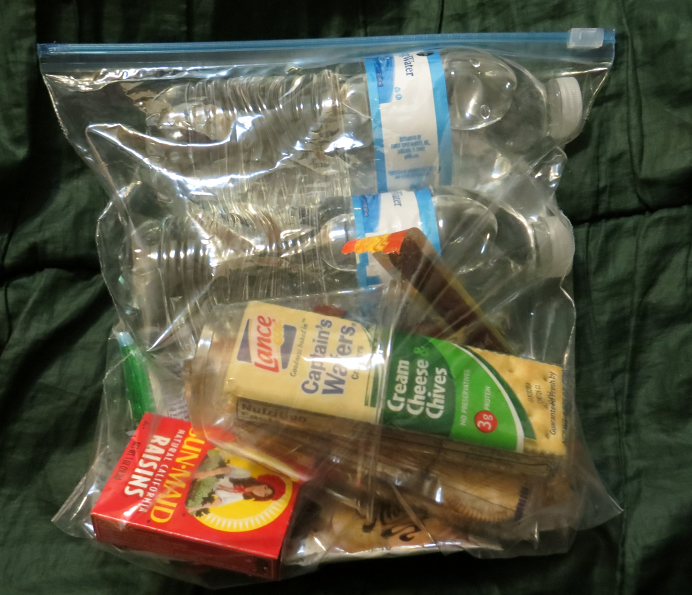 Forgot to mention a box of raisins

I'll trade for food, but won't be handing it out. Even if just trading labor.

Gotta agree with Gazrok on this,there will be no hand outs from us.And that grab bag sounds pretty nice,you'll have folks lined up for miles after the word gets out.

Barter?Maybe,depends on the situation.I look at food,in a shtf scenario,like this-any thats given away is literally taking food from my kids mouths which I would have a very hard time doing so.I feel the same on bartering ammo,i'm not gonna barter something that will come back to kill me and/or my family or group.

Like I mentioned in the other thread,that when things start coming back to some normalcy,then I do plan on and believe in the bartering system,just not while things are still in chaos.We can barely afford prepping for ourselves,let alone the unprepared zombie drifters.

It doesn't mean I'm going to shoo away people in need....but first, we have to be aware it could be a trick, and second, even if genuine, like was mentioned, they are taking food out of our mouths, so only what we really could spare, and hopefully they have something to trade for it (even if just news or information)...but preferably something more tangible they don't need, that I may be able to trade someone else (or better, that we need).
I'm not above charity, but I'm no rube either. Even if a little old lady, I'm going to suspect she's packing and looking to take what's mine, so I'll be sure to have protocols.

I'm not going to automatically rule out situations in which I will want to give food to someone. We might be talking about a 3 day power outage, not a complete SHTF situation. Note that these aren't MREs, or "real food", but primarily a mixture of "snack foods" that have a modicum of nutrition. I picked these to avoid attracting too much attention. I don't think I'll be fighting hordes of zombies over some snack crackers...

If I were doling out bowls of hot venison and vegetable stew, (which is what my family will be eating) it would be a different story.

I don't think I'll be fighting hordes of zombies over some snack crackers.
Click to expand...

Talk to someone who's been through a SHTF scenario, and they may have a different take on it. Sad as that is.

Still, I think your charity efforts are compassionate, especially if we're talking about a non-SHTF situation. In THOSE cases, I too will be happy to help out my fellow man, whether water or food, or help chainsawing through some storm debris, etc. Those are completely different scenarios. (Don't EVER loan out your chainsaw though, unless you are planning on buying a new one). For short term situations, I actually look forward to the way the community can pull together to get through it....

Your heart is in the right place,but a 3 day power outage is not a shtf scenario.We went ten days without power last year due to severe weather and my small community pitched in with cooking,clean up of trees and debris,patching up windows,etc.But we knew it was a short term and localized situation.Thats a different scenario altogether and I would help a person in need in anyway that I could.

A couple weeks after a nation wide or global shtf event,the power is out every where and all stores are closed and looted clean,people would kill for those snack crackers,water bottles and slim jims.I'm sorry,but unless I know them from my very small community,I just can't see risking our security,preps,family and group to give out food.

You asked in another thread if we've read "One second after"?I have,do you recall the wandering people that kept coming and coming and overwhelmed the town by using up all the medical supplies and rapidly depleted the towns combined food storage by trying to feed them all?Many of the towns members died from starvation and/or lack of medical supplies.John Matherson's daughter and his dogs come to mind.

Read this. It's a first hand account from someone who went through a SHTF event in Bosnia.
I can't think of a better primer for it.

I understand wanting to help so if it is a short term problem like the tornadoes in OK then yes send or give as much as you can handle but dont have it from you personally use a church or other such group not the red cross they take more than they give and the government wont allow them to give food unless it is store bought.... GRRR Gov sucks... any way I am all for helping people fed people are not as dangerous as hungry people but if it is long term NO! a Depression hits or EMP dont give they will 1 become dependent on you 2 will become not so civil about it 3 they will eventually over take you and then you are over

I applaud you for your thoughtfulness and preparing ‘Gimmie Bags’ that can be doled out to the populace who have made the choice to act like the grasshopper rather than the ant, DrHenley. I really do and such compassion is becoming a rare phenomenon and like most ‘good things’ is not considered as normal anymore.

With all due respect toward you, which I am sure, is well deserved … I still find that I must say what I am thinking and what my beliefs are. It wouldn’t be fair to prepping newcomers if I and others didn’t highlight this unfortunate fact:

“In dire circumstances there ‘will be’ those who will be willing to kill you in a heartbeat for the opportunity to get their hands on your cracker snacks. A hungry marauder would kill for far less than a package of crackers.”

In all fairness … you did say, “This is a controversial topic.” … and will probably continue to be.

In the meantime … my prepping is directed toward my survival and the survival of my loved ones … not strangers who have chosen to dance and party … who make fun of preppers … and embrace denial. After all … the people have been warned. When the day comes; the rules will change drastically and handing out crackers will not be in the rule book.

its not the people you give food that you trust ! its the people that attack them and demand to know were they got it that i would be concerned about.

Realize that where I come from, it's never been "every man for himself" in a disaster. People give the shirt off their back to someone in need. This is deeply ingrained in the culture. I realize that many of you have no idea what I'm talking about. Your loss...

Realize also that where I come from, the quickest ticket to hell is attempting to invade someone's home...or even threatening to.

If the population density is small enough, and there are enough people who are prepared, I believe it will be possible to practice some charity without getting yourself killed.

i was raised to help others when they need help with some thing..be it repairing a home or vehicale,to mowing thier yard and/or what ever..but when the complete shtf situation happens..letting folks know that i have food water clothes and/or what ever,right along with knowing my location.it aint happening..even the most careing and giveing person within 100 miles will turn on you for food and/or water.especilly if that person has family member(s) to think of as well..besides,i'll be limited on food water and other things to the point where i wont give it away knowing very well i need it for my self.

well i like the idea of the gimmie bags. i may do something like this if a short to mid term scenario were to arise. for example, hurricanes or tropical storms (looking at you Allison), were to come by, I may help out some neighbors or family members in need. But after a certain amount of days, the charity will stop, especially if I see my supplies going down a lot quicker than expected. Or if people are too roudy or unapreciated.
N

I don't want to sound unkind or cruel but for me that a no. Its a tip you got what they want. You'll only put your self at risk. When the freebee stop it will be trouble.

My wife and I are split on this issue. She wants to have a bag or something to hand out. I would rather warn them off and save the people that are with me. But she tells me I'm heartless.

might try pointing out how people are (right now)..some folks will kill for a dollar.or the watch on your wrist.and how things will get worse then that after a shtf situation....

I won't have goodie bags, but I will offer to make a trade. In the case that they don't have anything, can always trade labor, expertise, knowledge, etc. too, but no free handouts here. Still, I'm cool with helping a person out, but it is a two-way street. If someone wants a bed for the night, a meal, and some water to be on their way, fine, they can do so after working in the garden and/or cleaning a horse stall or two, etc.