Food shortages are here and getting worse.

That really needed a warning label Doc. . . Not good first thing in the morning.
C

Just read yet another article that said the major agricultural areas in China have received half of their annually expected rainfall. The government has declared it a “failed growing season”. This is on top of the article I posted about the “hunger stones” appearing in Czech amid a drought in that region, Ukraine, parts of Germany, France, Spain and the UK as well.

Here is how the US is faring:

Here is the global drought map:

It takes about 9-12 months in developed countries for a shortage in the fields to be felt by consumers of the end products. It is felt much quicker in third world countries who are more reliant on local producers.

This all comes amid the expected shortages from Russia and Ukraine and Sri-Lanka.

Encourage those who you know who are NOT preppers to make an effort to have stores of essentials; show them these maps and urge them to apply common sense. Forgo the cup of Starbucks coffee, or maybe the night out on the town, and put the money towards an extra bag of flour, sugar, oatmeal…whatever.

We are standing at the bottom of a hill and facing a rolling snowball from hell.

The anti-oil fanaticism of leaders across the globe, the careless spending of money and interest rates are only going to be part of this perfect storm ahead.

The fewer people who are dependent upon the government for the very food they need to survive, the better chance we have of coming out of this with most of our rights attached on the other side!
G

YET ANOTHER FIRE ON OUR FOOD SUPPLY!!! 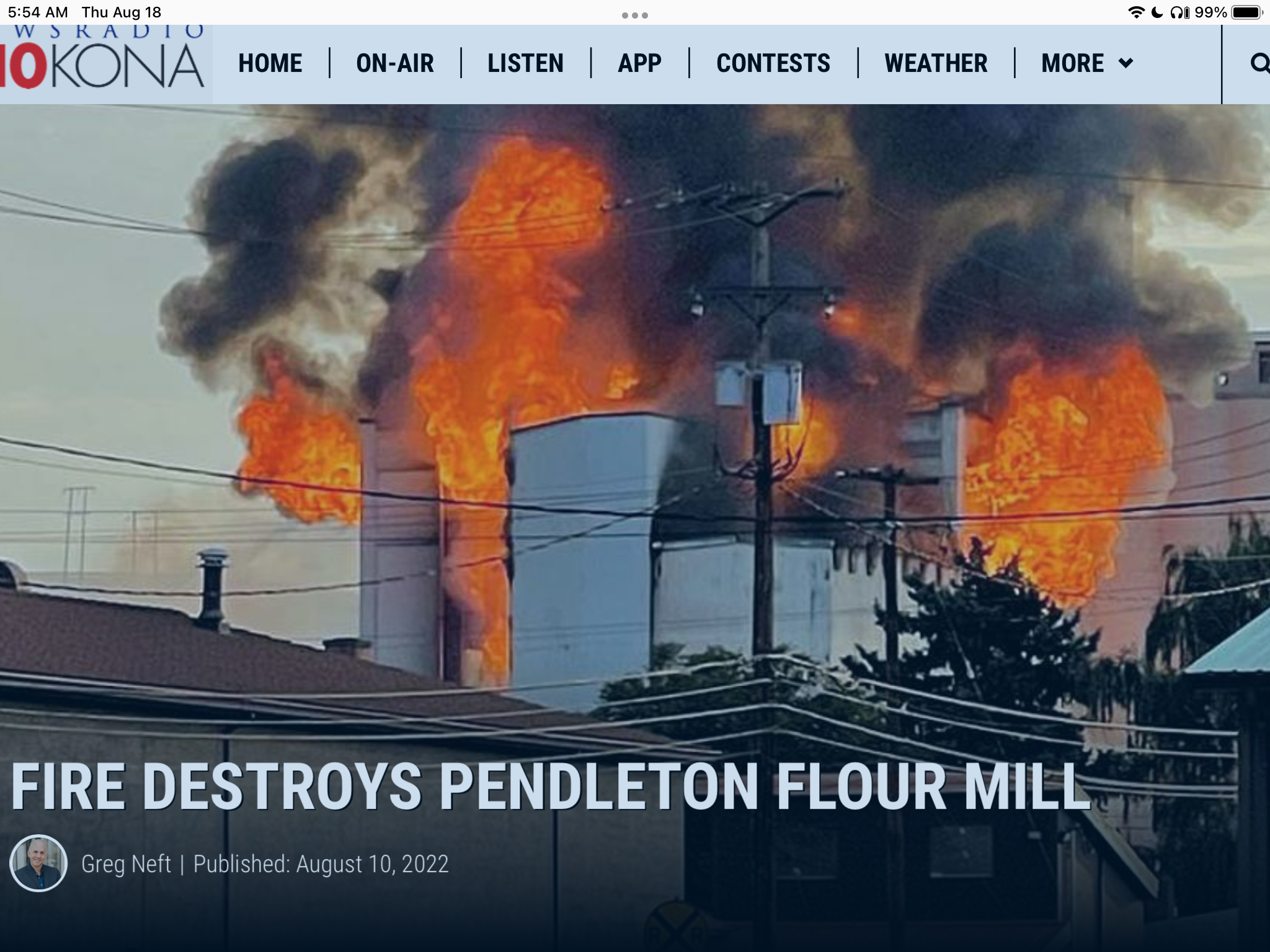 UPDATE 8:33-The County Courthouse is closed due to the active fire at the Pendleton Flour Mill. State Court operations will be moving to the courthouse in Hermiston, 915 SE columbia Drive.

(Pendleton, OR) -- An early morning fire that burned for hours has destroyed the Pendleton Flour Mill. This apparently happened just around 4:30am off 501 S.E. Emigrant Ave. Pendleton City Dispatch received multiple 9-1-1 calls for the blaze, which apparently was so intense because of silos that were full of finished grain. Emergency services are asking you to stay away from the area. The cause is unknown. The investigation will get underway as soon as the situation is stabilized.

This flour plant is 100% DESTROYED!
G

Humans do not have the digestive system to eat insects, bugs contain Chitins which will harm & kill humans these toxic proteins are 1000 times processed gluten. These people selling this are pure Evil Demons, no doubt tied to all the Eugenics programs currently in operation.


This from CBS NEWS…

“You're going to be eating crickets, so just get over it”​


“The data for crops is coming in and it is so staggering — yields so reduced — losses can no longer be hidden. Next few posts will show yields suffering, particularly US, EU, and China. Also, note that they are shifting the narrative to blame climate change, as the FOOD SHORTAGES will be how they justify the zero-carbon CLIMATE totalitarianism.

These are the days for which we have been preparing.

THIS!! Kudos to them! We must all follow their lead!!! 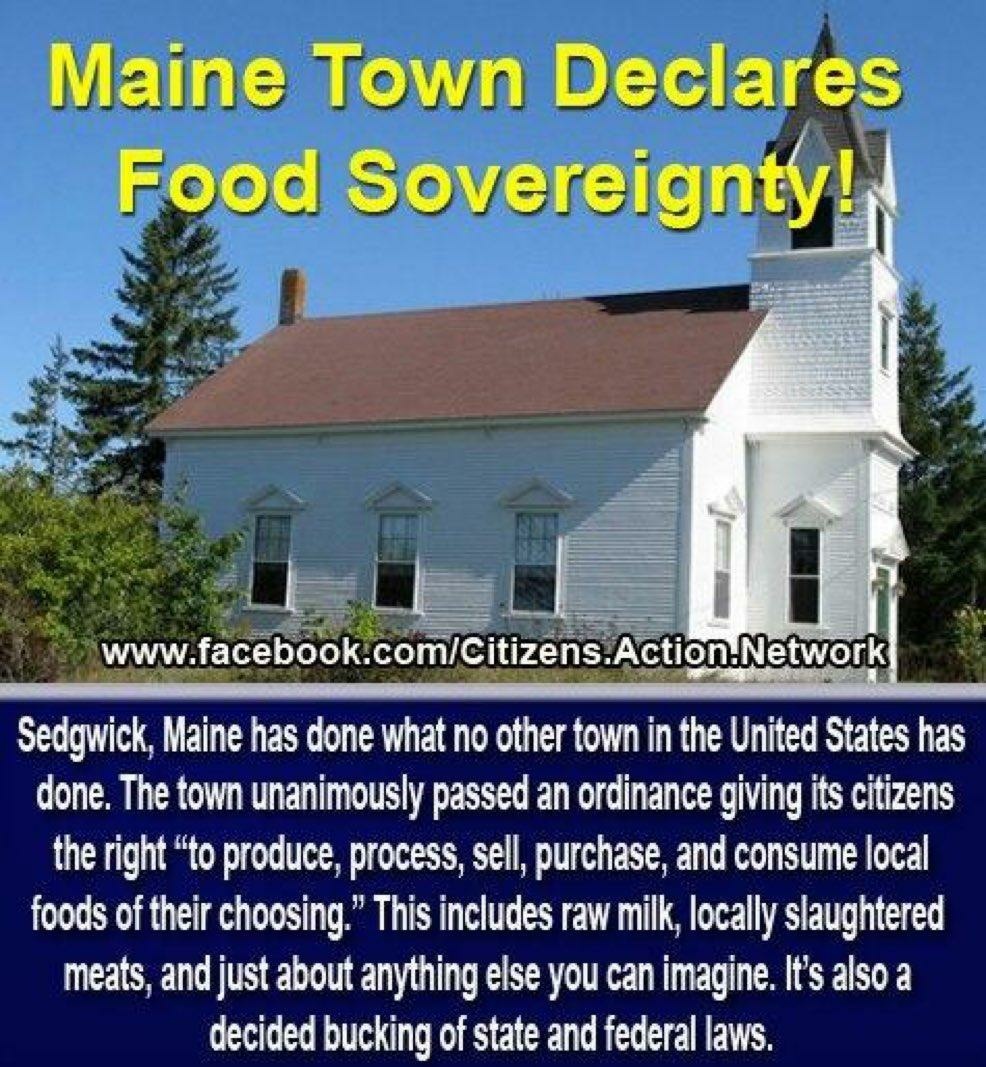 I hit up Dollar Tree today. Got 6 Hungry Jack dehydrated hash brown potatoes. So easy even I could prepare them. LOL

Just saw that tomatoes and all tomato based products will be hard to find.

Blaming it on drought.

I know lots of you follow IAF . Here are some of his Telegram

This is a screen shot.

Robinjopo1 said:
Just saw that tomatoes and all tomato based products will be hard to find.

I followed a double semi for quite a while today. Those Roma’s looked pretty sickly.

Robinjopo1 said:
Just saw that tomatoes and all tomato based products will be hard to find.

Meanwhile from my perspective I haven't seen the top of my table in a week. My decorating accents right now in my home are canning jars everywhere! Got two pressure cookers, a roaster and a dehydrator running full time for a week. Tomato sauce, canned tomatoes, salsa, rotel, tomatoes and okra, spaghetti sauce and dehydrated tomato powder. On top of harvests of peppers, beans, squash, figs and blackberries.

Thankful that I can still garden and have the skills to produce and preserve my own food and the fortitude to store it up. Lord help those that can't or don't.

As a side note my feet hurt like the dickens and I haven't done laundry or mopped in a week either. I have managed to keep up with showers. TMI?? 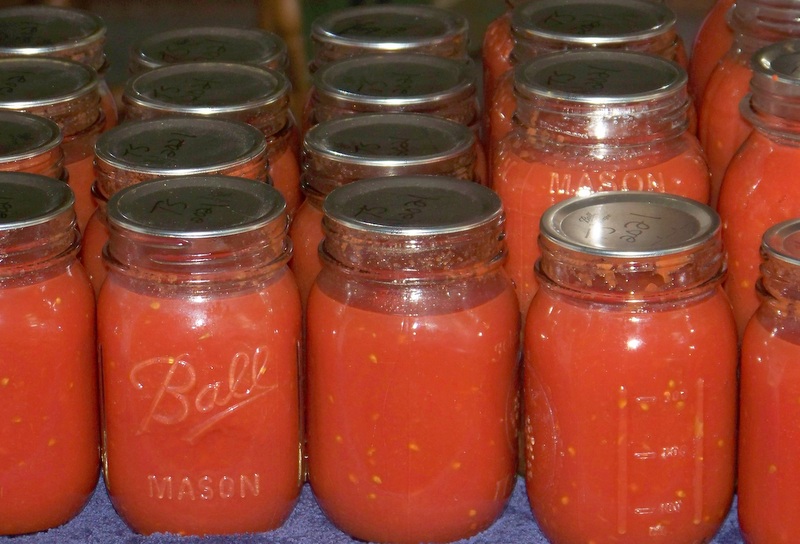 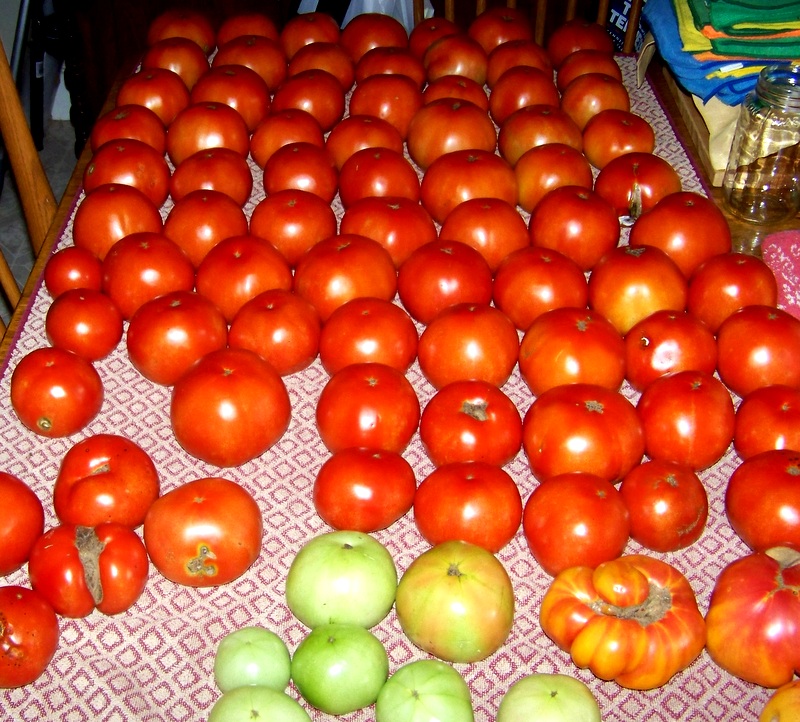 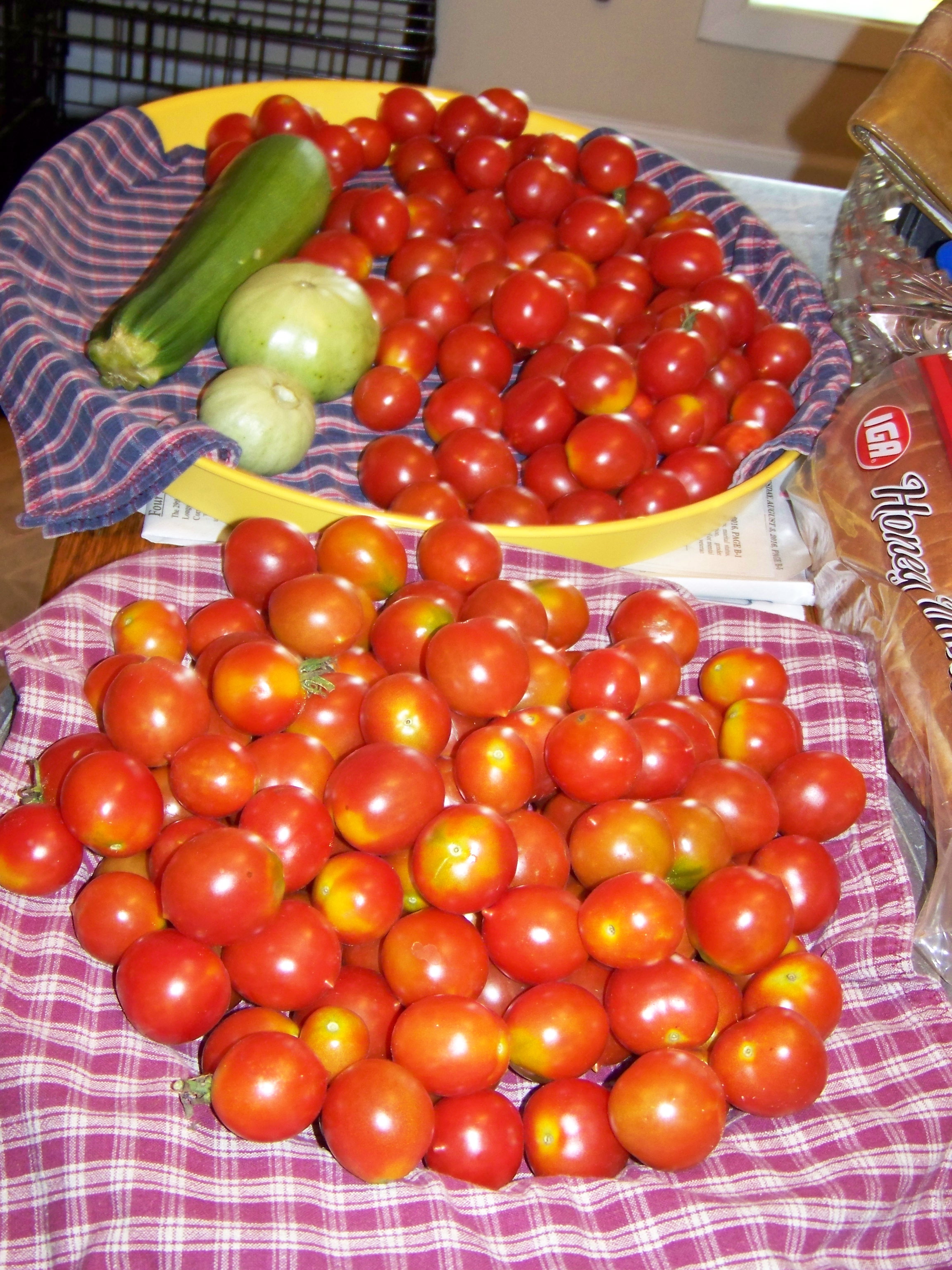 I wish I had tomatoes like this. The only prolific ones I have are the small yellow. Freezing them until I have a canner full.

Robinjopo1 said:
I wish I had tomatoes like this. The only prolific ones I have are the small yellow. Freezing them until I have a canner full.
Click to expand...

I swear one of these days girl I am going to pay you a visit and bring you a whole bunch of seeds. You need a DD intervention

I have a walnut poisoning problem. Cut the trees, but the poison is still here

Robinjopo1 said:
I have a walnut poisoning problem. Cut the trees, but the poison is still here
Click to expand...

I have the tomatoes in containers mostly. What I do plant, I dig a big hole and fill it with soil and compost. Use the ground as a bowl.

Robinjopo1 said:
I have the tomatoes in containers mostly. What I do plant, I dig a big hole and fill it with soil and compost. Use the ground as a bowl.
Click to expand...

Yeah nightshade family (tomatoes) are particularly sensitive to jugalone toxicity. I have hickory which also produce smaller amounts of jugalone. I grow hosta under them.

@DirtDiva "Thankful that I can still garden and have the skills to produce and preserve my own food and the fortitude to store it up. Lord help those that can't or don't."

I worry about not being able to preserve enough food ahead. I have to work and put in no less than 10 hours, usually 12 Monday through Friday. I guess I could do some canning in evenings after work but I'm honestly too brain dead. I go to garden after I quit working, check the chickens, gather eggs, make sure they have food, water fruit trees, etc...then I'm done. Once in a while I get a second wind after work to make dinner. Normally when I'm tired of eating the crap that larry makes for dinner which is about all hes able to do. A lot of times I'm in bed without eating dinner by 8:30 or 9 pm. (Unless I can't sleep due to so much on my mind). Weekends are grocery, errands, laundry, cleaning, squeezing in what canning, vacuum sealing, etc. I can get done in a day or day n half in between other priorities. Unfortunately, I end up buying more to stock than I can physically farm, harvest and preserve myself. Sometimes I work on weekends at my job if I'm covered up.
Not enough hours or energy in the days. Sometimes we have to find alternate ways of supplementing. We do what we can but lordy I wish I had time, didn't have to work, I could take care of a big garden and do all the stuff I read others are doing...I love reading all the things you others accomplish here! Some if it makes my head spin with the knowledge and abilities you have to implement and get things done.

My hope to meet my goals are that at least CONSISTENCY will prevail with the small additions I can add on my own and what I can buy to supplement in between...Until I cannot. That's all I got, for now..
You must log in or register to reply here.
Share:
Facebook Twitter Reddit Pinterest Tumblr WhatsApp Email Share Link