I was wondering what to do for supper, so I decided now was as good a time as ever to test my pocket stove and fix a meal.

Here is the stove, available on Amazon for $7.20. I keep the stovc in an outside pocket of my BOB, so it is a "Pocket Stove" I guess: 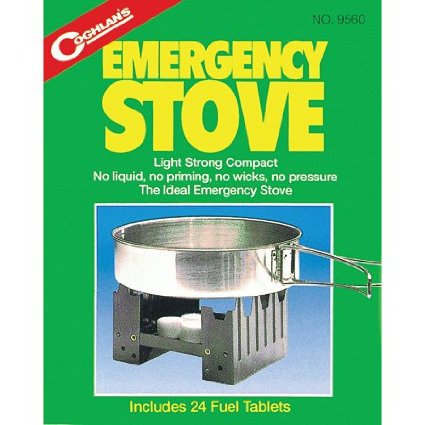 I took half a bag of Mountain House Beef Stew and put in a stainless steel cup, and filled about 85% with water. 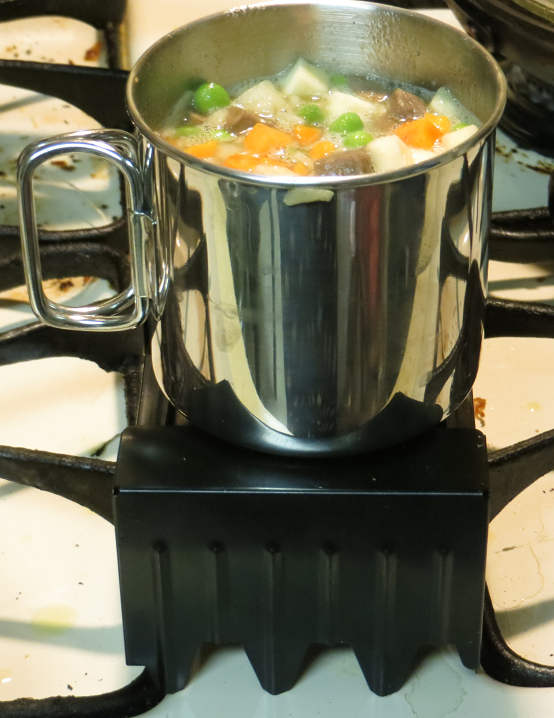 I used one fuel tablet, which brought the stew to piping hot, bubbling a little but not a rolling boil. 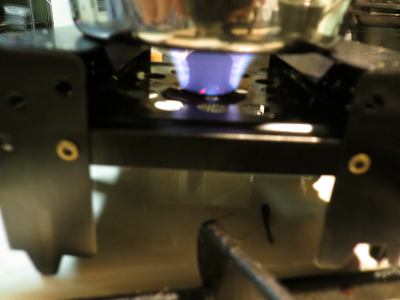 Well, it was a nice meal! Not bad at all for freeze dried stew. I was completely satisfied (to my surprise) and the stove worked just like expected. I figure that outside with a little wind, or in cold weather, you may need more than one fuel tablet.

For a dirt cheap piece of equipment, I have no complaints at all.

Tried an outdoor test today for lunch with the remainder of the bag of freeze dried stew. Earlier it was blustery, but the wind calmed down to a gentle breeze. Chilly but not real cold. 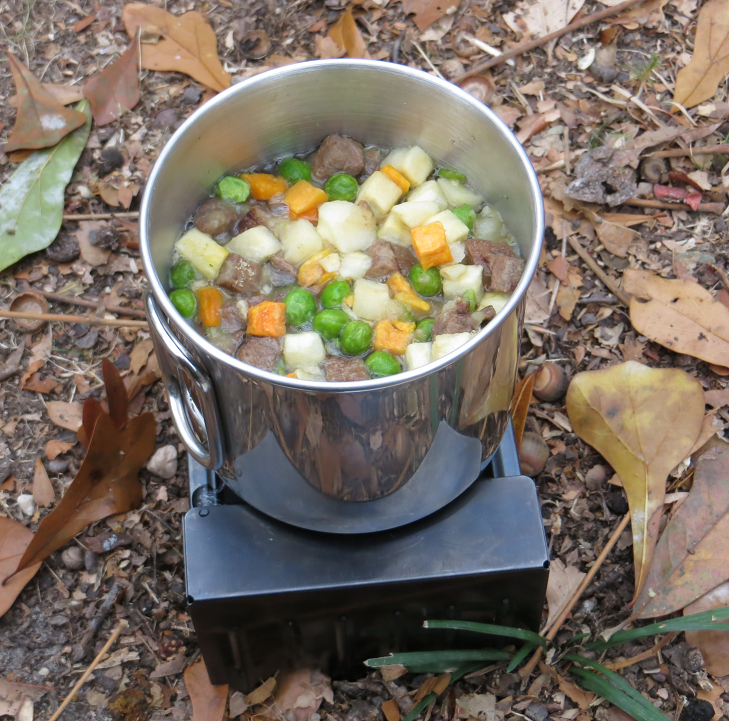 I had to turn it a couple of times to keep the wind from blowing the flame. If it's blustery I'll have to rig up something to block the wind. The indoor test got the stew hot enough to blister your tongue. In the outdoor test the stew was not too hot to eat right away, but still piping hot.

With a little more wind or colder weather, I think two tablets, or maybe a tablet and a half will be necessary.

maybe using a tarp or some thing else to close it in on all 4 sides when its cold out/windy out..that way the immediate area of it might be a Lil warmer

It was cold and blustery today, so I did a "stress test" - this time using Mountain House Chicken with Rice.

First thing I found out was that Coghlands waterproof matches are worthless. They worked fine in the previous two tests, with no wind and mild weather. In fact, I only had to use one match each time. Today, most of them would not even light, and the two or three that did light went out almost immediately. I tried striking two together, and one lit briefly and went out. The other one was charred where it was touching the one that lit, but it never ignited.

After going through about a dozen matches, the striker on the side of the box disintegrated.

The backup matches are Stansport brand that I bought at Gander Mountain. They are thicker, longer, and with a larger head...and they WORK.

Next problem was taming the wind. I ended up building a little brick wall around the stove, which did the trick.

As I suspected, one fuel tablet was not enough. After several minutes it was apparent that the Chicken with Rice was not going to be hot enough. Not wanting to be wasteful, I didn't want to use two whole fuel tablets. The problem was how to cut one in half without it crumbling.

I scored the tablet with the serrated part of the knife blade on my Leatherman Wingman, and was able break it cleanly...well mostly cleanly. I did get one little corner of one half that crumbled, but very little loss overall.

I placed a half tablet next to the nearly spent original tablet, and that got the Chicken and Rice satisfactorily hot. A little bit of the rice was still crunchy at first but after stirring and letting it sit, it was good to eat. I mean, it was really GOOD to eat...quite tasty! Not quite as filling as the Beef Stew however.
Last edited: Nov 24, 2013

Hey Doc, great job, i like that you did some real field testing. I carry some tin foil with mine to make a wind break, like two feet, fold it in thirds make a circle around the stove. Plus it really helps keep the heat contained.

I've used this camping many times. I just put some rocks around the sides, and it keeps the wind out pretty well.

I do have two lighters in my BOB, but I was determined to make a go of it with the matches. I figured it might be a little hard in the wind, but with the Coghlans matches it was downright impossible. I think I only went through two or three of the Stansport matches. They all lit but I had a hard time keeping them burning long enough. The fuel tablets didn't light immediately even in the indoor test.

i deffintly need to look into what matchs i have.so i'll know if i got some good ones or not..thier water proof n all..but dont know if they'll work in the conditions you used yours in or not
You must log in or register to reply here.
Share:
Facebook Twitter Reddit Pinterest Tumblr WhatsApp Email Link