Dyatlov solution staring us in the face?

I'm sure DP members are familiar with the mystery.
My theory- While the Dyatlov group were waiting for a train connection at Serov station, a guy claimed they'd stolen his wallet and called the police but no arrests were made, so my guess is that he and his mates tracked the Dyatlovs to get it back and a big fight broke out on the mountainside.
i've posted the theory all over the internet for the past few years but nobody has been able to shoot holes in it, so if any DP members are familiar with the incident and want to discuss it, go ahead..

Below- a photo of the abandoned tent superimposed on a more modern picture showing their route down to the trees where they froze to death. 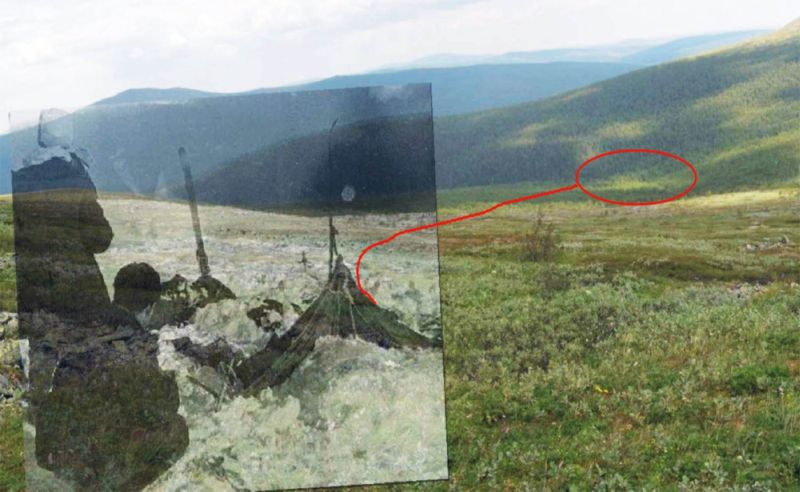 They was caught in a blizzard with hurricane force wind gusts.

Proud Prepper said:
They was caught in a blizzard with hurricane force wind gusts.
Click to expand...

if that's so, the partially-flattened tent would still have given them some protection, so why did they abandon it and run down to the trees partly clothed, and where did the bruises and broken bones on some of them come from?
Below: the positions of the bodies as found by searchers, 6 died in the trees and the other 3 led by Zina tried to get back to the tent but died in their tracks of the cold- 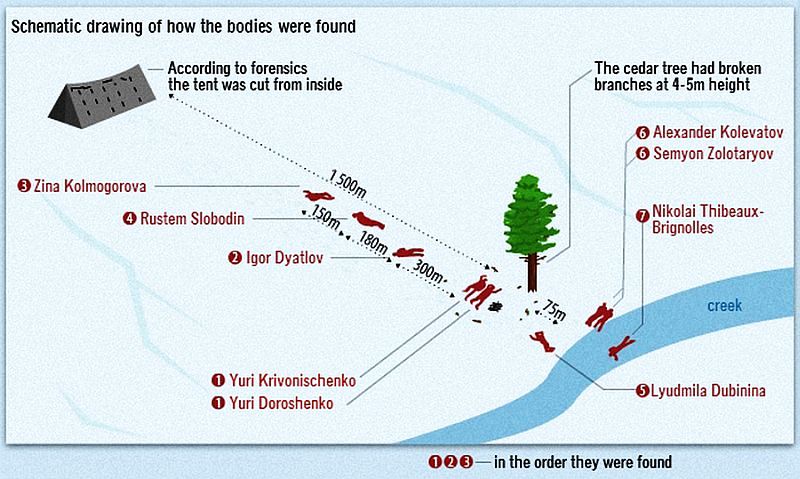 Hypothermia can cause humans to act irrationally before death occurs.

Jayson said:
Hypothermia can cause humans to act irrationally before death occurs.
Click to expand...

Yes, in the terminal stage of hypothermia people amazingly feel hot (it's just an illusion) and strip off most of their clothes to cool off (it's called 'paradoxical undressing') and they die quickly after that.
But the Dyatlovs had settled down for the night in sleeping bags in the tent wearing their lightweight night clothes, so whatever disaster hit them you'd think their first instinct would have been to put their warm clothes back on before running down to the trees.
When searchers found the tent, there were plenty of warm clothes in it.
They were all experienced hikers so they must have known they were signing their own death warrant by abandoning the tent and warm clothing unless they were in a panic and felt they had to get away from the tent pronto.
Some built a snow hole and a fire down in the trees, but being only partly dressed they eventually died of cold.

Below; the tent after the searchers re-erected it back in town, it's covered in slash marks as if the Dyatlovs knifed their way out in a hurry, or someone or something tried to slash its way in.
One theory is that a bear did it, but the incident happened in early February and wildlife experts say bears would have still been in hibernation at that time.
And forensic experts say the tent was slashed from the inside.

I like the sudden katabatic wind theory. What makes it plausible is that there was another similar incident, the Anaris incident, in which there was a survivor to tell what happened.
If there was a very strong wind, blowing into the entrance flap, they would not open the flap for fear of the wind blowing straight into the tent and blowing it away. They would have been afraid that at any moment the wind could blow the tent away and would want to get out of the tent ASAP and find shelter from the wind in some trees. At the time, they were more afraid of the wind than of the cold. Injuries were consistent with being hit by blowing debris.
In the Anaris incident, they had built a snow cave to escape the wind, but the roof of the snow cave began collapsing and one of the people left the snow cave to try to fix the roof. He was unable to fix it, and then was unable to get back into the snow cave, so he decided to keep physically active and move around, eventually leaving to seek help. He was the only survivor.

DrHenley said:
I like the sudden katabatic wind theory. What makes it plausible is that there was another similar incident, the Anaris incident, in which there was a survivor to tell what happened...
Click to expand...

Personally if I was in a tent and a violent katabatic wind and/or blizzard hit it, my first instinct would be to stay inside and ride it out, not slash my way out and run a mile to the trees partly dressed like the Dyatlovs did.
And no Arctic/Antarctic explorers ever left their tents when hit by blizzards.
The Anaris Incident was a bit different, they dug a snowhole in a shallow frozen ditch to escape the wind but it gave little protection and they froze before they could get their sleeping bags out of their rucksacks.

From the net- "When the Anaris-group started the trip, they encountered an outside temperature of around minus 15 degrees Celsius (5 degrees Fahrenheit) with a wind speed of around 6 m/s. This particular day the wind accelerated and the physical situation of the group gradually affected their condition. The weather then unexpectedly changed to the worse and an enjoyable skiing tour rapidly turned into an tormented state of survival.
Soon the temperature dropped even further, but the situation really turned devastating due to the sudden acceleration of the wind - this with wind speeds up to at least 20 m/s. The cooling effect was then around minus 50 degrees Celsius (-58 degrees Fahrenheit). The group hastily tried to seek protection – which they did in an immediate dug out ditch along the trail. The shelter that was only 0,8 meters in depth (c. 2.5 feet), had its top cover repeatedly blown off.
Yet another three people, also surprised by the sudden storm, tried to join the shelter. In all there were now nine people with four wind sacks and sleeping bags, fighting for survival. However, the sacks and bags were never used since they failed to open any of their backpacks alongside an overall chaotic situation. The last joining people that requested shelter together with the other six, repeatedly tried to fix the constantly failing uppermost part of the bivouac, this from the outside - but had to give up. Unable to fit inside the crowded and by snow blocked entrance, they eventually wandered out apathetic in the storm. Only one of them survived since he was in constant movement and was fortunate to be saved by two people later on - although losing all his extremities."

Richard Holmgren, Andreas Liljegren, Ekaterina Zimina and Artem Domogirov pay homage to the events of 1959 and the 60-years anniversary of the Dyatlov group demise, get personal and up close experience of the the terrain and conditions, what it takes to traverse in the same time of the year, and...