A judge has delayed sentencing until Jan. 29 for an FBI lawyer who admitted to falsifying a document to obtain a surveillance warrant in the investigation of President Donald Trump’s 2016 campaign.

U.S. District Judge James Boasberg of the D.C. District, appointed to the bench by then-President Barack Obama in 2011, has pushed back the sentencing for Kevin Clinesmith, Politico reporter Josh Gerstein posted to Twitter.

The reason, reportedly, is because Carter Page, the Trump campaign aide who had his communications surveilled as a result of the warrant obtained by Clinesmith’s alteration of an email, is seeking to be treated as a victim and get restitution, Gerstein reported.

AFTER the inauguration!
How convenient.

Either Lin Wood is crazy or he is throwing it all out there.

@linwood - linwood - I cannot imagine the pressures felt by the Chief...

I cannot imagine the pressures felt by the Chief Justice of U.S. Supreme Court. Tough job! Bet it is even tougher when you know that Nancy Pelosi, Rod Rosenstein, John Podesta, & John Brennan have a...

The last report I saw for her was that she attended a meeting, BUT instead of sitting in the front like always, she sat at the back of the room and said absolutely nothing. Odd.
F

GeorgiaPeachie said:
The last report I saw for her was that she attended a meeting, BUT instead of sitting in the front like always, she sat at the back of the room and said absolutely nothing. Odd.
Click to expand...

Watched a video yesterday (sorry, don't remember where exactly, but I think it was one of Mike Adams' recent podcasts) that said her seated at the back of the meeting and saying nothing was a strong indication it was a "double" sitting there, not Haspel. She may actually be MIA (my thought). CIA and Dems (as seen with K.Harris and Hillary before) do use doubles when they need too. If it were really Haspel, they posited she would have been up front and center. She is the CIA head, after all.
Last edited: Dec 28, 2020 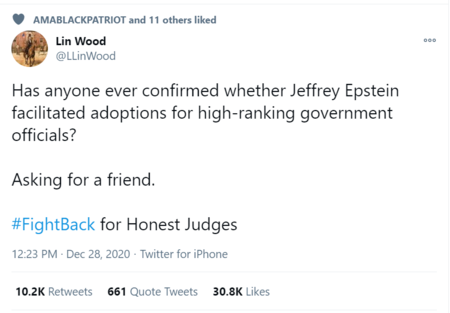 Ron (@CodeMonkeyZ) Tweeted:
Was MI-6 involved on Christmas?
Who would want to disrupt a scheduled EAS test?
Why?

Freedom Fighter (@Freed0mFighting) Tweeted:
@CodeMonkeyZ “They” would want to disrupt an EAS test to see what works when they need to disrupt EAS on a widespread basis at the appropriate time. It seems relatively little effort knocked out a large chunk of coverage. That was their own “test.” Patriots need a backup or second layer.

Its just mis information to delay the Patriots from action.

Rellgar said:
Its just mis information to delay the Patriots from action.
Click to expand...

I feel this way as well now since nothing “major” ever seems to happen.

So Lin Wood says the way John Robert's is compromised is that he illegally adopted 2 kids from Wales through Jeffrey Epstein. Lin Wood is either crazy or has the goods.
Last edited: Dec 31, 2020
G

Makes you wonder if this flight from Boca Raton has anything to do with Trump leaving Florida? I highly doubt they are keeping us, or anyone else in the know of where he actually is.