Former Pfizer Vice President and Chief Science Officer Michael Yeadon obliterated a Reuters hit-piece “fact check” on him from earlier this year, calling their efforts to smear his claims about COVID-19 and the vaccines “a pack of lies.”

The Reuters article from May, called “Fact check: Ex-Pfizer scientist repeats COVID-19 vaccine misinformation in recorded speech,” called Yeadon an “anti-vax proponent” who “has made unfounded claims” about the health risks associated with the COVID mRNA vaccine.


The article concluded that “infected but symptom-free people can spread the coronavirus; vaccinated people are better protected but not 100% immune; research shows COVID-19 vaccines are safe and effective for adults and pregnant women.”

In a June interview with America’s Frontline Doctors (AFLDS), Yeadon methodically broke down Reuters’ bad-faith “fact check” about him point by point.

“The narrative statements that have repeatedly been claimed by the authorities which are a pack of lies are:

“1. Asymptomatic transmission. It’s definitely a lie. Have you seen that video where Fauci states that ‘it’s always a symptomatic person who drives an epidemic and never people without symptoms’?

“A WHO doctor said exactly the same thing.

“All marries up with the statements I’ve made, and with biological logic,” Yeadon added.

“2. Variants. They’re just being idiotic. I can show several good quality papers demonstrating that T-cells from a convalescent person or an immunized person each recognize all the then-available variants, again, as anticipated by fundamentals of immunology. The weak twaddle in their piece about antibodies is risible.

“3. Vaccines. The bastards are actually claiming they’re safe. Got them. We have VAERS, Yellow Card, and EMA monitoring. We have mechanism of toxicity. We have multiple open letters to EMA (warning of blood clots) which were immediately followed by vaccine withdrawals (for blood clots).

“4. Pregnancy/fertility. No one in their right mind thinks giving experimental treatments to pregnant women is other than reckless. Especially when reproductive toxicity testing is incomplete.”

Yeadon didn’t stop there. He also addressed two glaring disclosures about the COVID injection that have been completely ignored by the media and medical establishment.

“But on top of this stupidity, are two recent public disclosures: (I) the distribution of vaccine to tissues in mice shows a very disturbing concentration into ovaries,” Yeadon said. “No one has followed it up, so the assumption has to be this is happening in humans too.”

“(II) our concern expressed in the December 2020 petition to EMA about immune cross-reactivity between spike protein and human syncytin-1 has been confirmed. A paper was very recently published showing young women making antibodies to syncytin-1 within days of vaccination.”

Yeadon concluded his rebuttal by pointing out that governments around the world have “lied and lied” about coronavirus spread and the risks posed by the COVID injection in order to economically destroy nations to consolidate power.

“Of course this is wholly fraud. Imagine that the number of people in U.K. who’d actually been killed by the virus, instead of dying with it, was just a couple of thousand; you’d been on the streets with torches and pitchforks,” Yeadon told AFLDS.

“The effect of compliance with their ludicrous policy responses has been to hollow out and arguably to have destroyed economically several G20 counties, and actually increased the number of avoidable deaths, not least by deprivation of healthcare.”

“These people all need locking up in that new high-security facility being built at speed at Wellingborough, Northants,” the former pharmaceutical executive continued. “The prima facie case against a dozen or so people in U.K. warrants their arrest pending criminal prosecutions.

“If these figures are of the same order of magnitude for other countries as well, and there is no reason to assume otherwise, then the plague is a deception of unprecedented proportions, and crimes committed against humanity on a huge scale have been committed here,” he concluded.

Yeadon likely drew the attention from Reuters in the first place after coming out against the COVID-19 shots in April, claiming they likely are being used for a “massive-scale depopulation” agenda.

"I took the first jab of AZ and straight away had severe reactions which lasted ten days, I recovered eventually and was told it would be twelve weeks before the second one…,"
"About six weeks later I was offered and took the second AZ shot, but with a little more knowledge of the dangers,” he continued. “Needless to say the reactions were disastrous, my hands and feet were either frozen, numb or burning, and pretty much useless for two weeks, I feared I would never play again, (I suffer with peripheral neuropathy and should never have gone near the needle.) But the propaganda said the vaccine was safe for everyone…."
...
"Following the PM’s announcement on Monday the 19th of July 2021 I feel honour bound to make an announcement of my own: I wish to say that I will not perform on any stage where there is a discriminated audience present. Unless there is provision made for all people to attend, I reserve the right to cancel the show. "
- Eric Clapton.
H

You have to look at the evidence and think for yourself. Some people are only capable of believing what they are told, over and over and over


and THAT was approved by the FDA...

Interview with Dr. Byram W. Bridle, PhD: "We screwed up. We didn't realize the Spike Protein is a toxin"

Alex talks with Dr. Byram Bridle, an Associate Professor on Viral Immunology at the University of Guelph about new peer-reviewed studies that suggests there may be terrifying reasons side effects such as heart inflammation, VITT, and other serious issues may occur in those who have been...

Well duh, at least 6 of those Texas democrat idiots running from their vote got covid despite having been vaccinated, so yeah, it's not really that great, and certainly not "RARE" for vaccinated people to contract covid. With a 99.8% chance of survival without the untested, experimental vaccine given immunity from lawsuit, I'll take my chances.

COVID-19 vaccines are the best way to protect people from getting seriously ill with the virus, as well as stave off extended hospital stays and death, according to the Centers for Disease Control and Prevention.

However, no vaccine is 100% effective and, though rare, fully vaccinated people can contract coronavirus. These cases, known as breakthrough infections, can cause COVID-like symptoms — or no symptoms at all.
Last edited: Jul 21, 2021

Helen Back said:
Well duh, at least 6 of those Texas democrat idiots running from their vote got covid despite having been vaccinated, so yeah, it's not really that great, and certainly not "RARE" for vaccinated people to contract covid. With a 99.8% chance of survival without the untested, experimental vaccine given immunity from lawsuit, I'll take my chances.

COVID-19 vaccines are the best way to protect people from getting seriously ill with the virus, as well as stave off extended hospital stays and death, according to the Centers for Disease Control and Prevention.

However, no vaccine is 100% effective and, though rare, fully vaccinated people can contract coronavirus. These cases, known as breakthrough infections, can cause COVID-like symptoms — or no symptoms at all.
Click to expand...

Its not rare for those that had covid shots to be infected with covid, there not vaccines!

I guess the didn't get the memo to stop counting the vaccinated covid cases.

I just received this morning data out of Israel. That shows the population is about 84% vaccinated. But the new cases of COVID in Israel are about 84% with vaccinated individuals. It certainly is lookinng like the Pfizer vaccine is not working with the Delta variant.
Click to expand...

That is a stunning statistic.

Report: 49 Fully Vaccinated in New Jersey Have Died of the Coronavirus

Dozens of fully vaccinated people in New Jersey have died of the Chinese coronavirus, according to the state's Department of Health.

I decided from the very beginning of this whole china flu scam that I wasn't going to take any rushed government "vaccine". Seems I made the right choice, as many others did too. I'll take my chances without the shot. 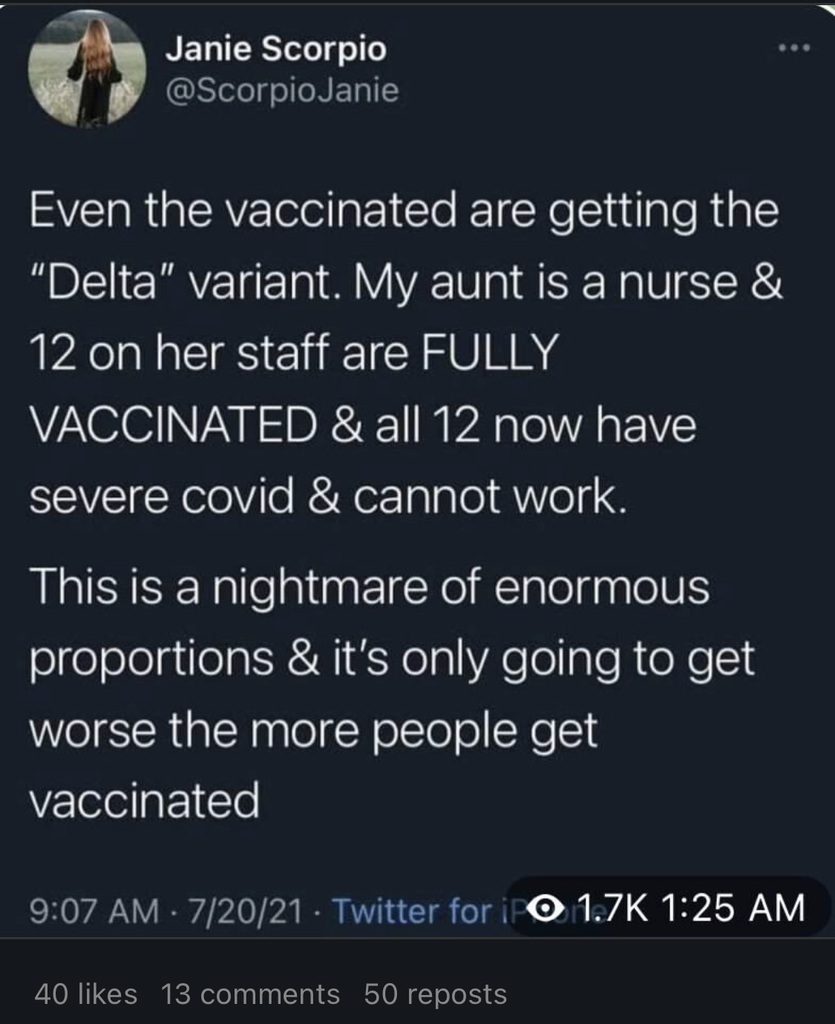 Dr. Peter McCullough On How The Entire Pandemic Was A Setup For the Vaccines – LOGISTICS MONSTER

This is what I was trying to explain in a previous post.

This is not a unique scenario. Marek’s disease, a lymphoma virus disease in chickens, is the best known example of leaky vaccines causing evolutionary escape[54]. Long story short, the original virus was relatively mild, until flocks of chickens were vaccinated with leaky vaccines that, while preventing the chickens from dying, did not prevent infection. The virus engaged in an evolutionary arms race against the vaccines, which required frequent updates, and became more infectious and lethal over time. Eventually, the virus became so lethal that any unvaccinated chicken was certain to die if infected; the vaccine became the only means by which a flock of chickens could expect to survive an outbreak

NSW News – 9News – reported this weekend on the new COVID hospitalizations in Sydney, Australia. Almost a million people can’t leave their homes because one man died in his 80s. Sydney authorities announced the new lockdowns last week. This is insanity. In a video update by NSW-9 News the...

141 new Covid hospitalizations. All BUT 1 were vaccinated. Wake up people. . . The vaccines are not working.

How long ago that I said this was my biggest worry. . . Forcing us to do something is not freedom. 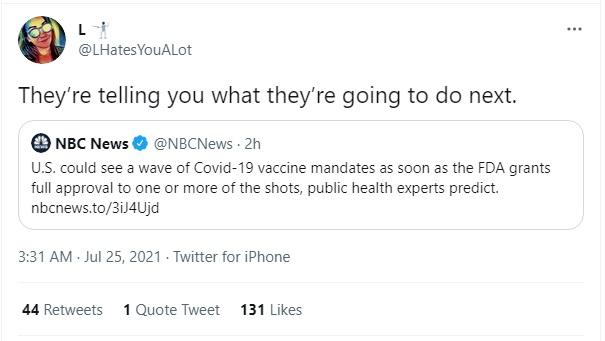 Brent S said:
I am ok with banning unvaccinated from large public gatherings and events that could spread it more easily. Hell, on the other hand the world is overpopulated and thinning out the herd would solve most of our problems too….
Click to expand...

Were your parents siblings by any chance?

spazatak said:
Were your parents siblings by any chance?
Click to expand...

Actually 3 generations of doctors and scientists thank you
H

Yeah, you sound like a silver spoon, privileged brat that has never experienced hardship, and therefor never had to really look at things for what they are, just doing what the bill payers tell you; while thinking you are so much smarter and better than everyone else. Tell me about your private schools, or was it boarding schools?
You must log in or register to reply here.
Share:
Facebook Twitter Reddit Pinterest Tumblr WhatsApp Email Link